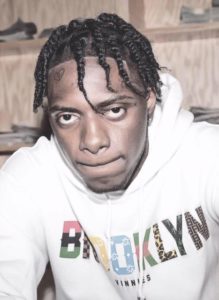 Brooklyn-Drill is the up and coming sub-genre of hip hop that is gaining prominence for a few years. Artists such as 22gz, Fivio Foreign, Pop Smoke, and Sheff G along with several others contributed from their side to establish the sub-genre as a staple form of music.

And among the bunch, the name that cannot be missed is Sleepy Hallow. Laced with metaphors and similies catered with his deep voice, the rapper made a few hit singles that gained traction to his name.

And his love for storytelling and street anthems, he was counted as one of the best among the up-and-comings Brooklyn has to offer.

This wiki-article explores the life and career of Sleepy Hallow along with his net worth and baby mama status.

Sleepy Hallow was born on 20 December 1999. The rapper turned 20 years old while celebrating his birthday in late-2019.

Per his date of birth, Sleepy owned Sagittarius as his zodiac sign.

Real name Tegan Joshua Anthony Chambers, Sleepy Hallow was born to his Jamaican immigrant parents in Flatbush, Brooklyn, New York. Owing to his private nature, he never broke silence on the details of his parents.

Furthermore, he never mentioned any further info regarding his family, including his possible siblings.

Growing up, he became gang-affiliated like most of the young people did. Though many lost lives and went to prison over the topic, still he displayed unscathed loyalty to Brooklyn-based 83 Gangster Crips.

With burgeoning prominence as one of Brooklyn’s finest, Sleepy’s social media grew exponentially over the year.

New York witnessed the rise of many brilliant emcees since the birth of hip hop. Following the rise, many talented rappers graced the microphone putting New York on the map.

Sleepy grew up listening to the music of the predecessors who came before him and gathered inspiration to follow the craft. Off all the forms, storytelling enticed the rapper more and had him hone his skill over the years.

And the life he lived in the borough became the subject matter to explore in his songs.

Sleepy rose to prominence featuring in Panic Part 2 and Panic Part 3. The wordsmith showcased his talent as a rapper which counted him as someone people need to pay attention to.

He mostly collaborated or featured with his fellow Brooklyn-based rapper Sheff G. And together, the duo left a mark in Brooklyn’s rising drill music scene.

Sleepy released his debut album Don’t Sleep on Halloween day of 2019. The album was released under the label Winners Circle Entertainment Inc/Empire.

The 14-track project garnered him the push into the underground scene he was looking for. I Get Luv, Bestie, Tension, and Agony were some of the hitmakers from the project.

With all the shows and hit songs, Sleepy is stacking the money that is contributing to his burgeoning net worth. As of spring of 2020, he was estimated to worth $250,000.

No matter how tough Sleepy appeared on the outside, he surely had a soft side for his girlfriend inside his heart. In 2018, he was dating Brooklyn-native Dreaa Banks. 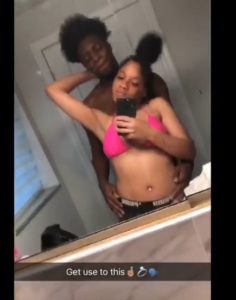 Sleepy and his girlfriend together in 2018 (Pic: Dreaa Banks’s Facebook)

The couple featured on several of each other’s Facebook. With privacy on their mind, neither of them spoke publicly regarding their relationship.

However, the lovebirds featured several times on each other’s social media platforms. On Sleepy’s 18th birthday, Dreaa wished him with a loving proclamation that he meant the world to her.

As of May 2020, their relationship status was in an obscure place.

The post suggested that the in-love pair ended their romantic escapades but with no disclosure on the reason behind the split. The fact that Sleepy’s alleged baby mama has a child, opened up the spot for an argument that it could be his kid.

Of all the pioneer figures known for establishing a new sub-genre for hip hop named Brooklyn Drill, Sheff G...