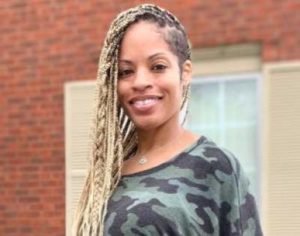 Big Brother Season 23 returned with a 90-minute premiere special on July 7, 2021, and so did, an all-new set of 16 contestants. Among them is Tiffany Mitchell, kind, funny, and outgoing.

Find out more about her in this Tiffany Mitchell Wiki.

And before that, let us tell you, she is not to be mistaken for The WNBA Player with the same name and even similar looks.

So Tiffany Mitchell takes on a new journey into the Big Brother house with her journal to document the entire process, iPhone, and her recipes. As part of the deal, she will have to compete with her co-contestants while sharing space with them before she wins the hefty price of $500,000.

Meanwhile, her strategy in winning the game is to learn as much as she can about everyone else and keep her own mouth shut.

Because she considers the duo Hitmen with Cody and Derrick as her favorite house duo, so far in the show, she seemed to follow their kind of gameplay this season.

While all that is left in the days to come, Tiffany is excited to sleep in the HOH room. Also, she had shared, “I actually might want to try slop.”

Tiffany closely followed Big Brother before she appeared on one of its renewals. So far, her favorite past BB moment is “when Dan Gheesling eulogized his own BB funeral to keep him in the house.”

Before CBS revealed this season’s cast, it had pledged that all future casts of Big Brother and other reality series’ including Survivor and Love Island would contain at least 50 percent Black, indigenous, and people of color.

Supposedly a generous, loyal, enthusiastic, and optimistic Leo, Tiffany Mitchell grew up celebrating her birthday every year on Aug. 5th. She is someone who is obsessed with horoscopes and has reached the age of 40 in 2020.

Tiffany hails from her hometown of Detroit, which is the largest city in the midwestern state of Michigan. Even, at the time of this writing, she called the place her home.

While the topics surrounding her early life and family background were still off-limits to us, we knew, she loved to entertain her friends and family. She mostly enjoyed gathering them around as she did voice impersonations of each of her beloved ones.

Until July 5, 2021, Tiffany Mitchell did not seem to be on social media. In fact, she is the only cast member this season who is not on Instagram. Some had it believing, perhaps this had something to do with her “alter ego.” (On her CBS profile, Tiffany briefly mentioned utilizing her alter ego.)

Tiffany Mitchell had less than $1.5 million net worth before the world came to know about her Big Brother stint.

Professionally, she is a phlebotomist. According to her could-be LinkedIn profile, Tiffany worked as a phlebotomy relations coordinator at Biotech Clinical Laboratories in Detroit Metropolitan Area.

From what indeed.com reported, someone in the profession as Tiffany earned the average salary of $11.87 per hour in Michigan, Detroit Area.

On her profile on CBS, Tiffany Mitchell mentioned, for her, the most difficult part about living in the house will be being away from her son. Because the mother-son have never been apart for more than a week. But, she was yet to reveal with whom she left her son while she will be provoking drama inside the reality TV house.

That been said, Tiffany still has not revealed her relationship status, any husband, or a boyfriend.