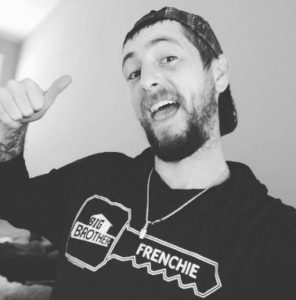 Brandon “Frenchie” French is one of the 16 new contestants who entered the house of Big Brother. The Camden-based contestant is here to share a living space filled with drama with 15 other contestants from different backgrounds.

He might be something of an interesting character. So, let’s learn more about him with this Brandon “Frenchie” French Wiki where we cover details on his job, family, and wife or girlfriend details.

“Supercalifragilisticexpialidocious, compassionate and exuberant,” are the three adjectives that could best describe Brandon “Frenchie” French,  a Tennessee-based farmer who is making a debut in Big Brother season 23. He will be joined by 15 other contestants from different backgrounds and has a dream to pocket the grand prize of $500 thousand.

Brandon was a fan of big brother who believes Britney Haynes and Rachel’s hair extensions were the best duos from the show. And one of the memorable moments from the show for him was Dan’s funeral, on his daughter’s birthday which he dubbed as “legendary.”

The Tennessee-based contestants believe that every day is different so strategies to win change every day. He believes in building relationships not only alliances. In his words: “Set strategies are over-rated and crumble so my lifestyle fits perfectly with the Big Brother house.”

As for his motto, Brandon shared that: You will always go through rocky times, but together we can crush those rocks into fine sand and create our own paradise!”

Before the official announcement, Brandon hinted at being on the show in late December of 2019. He appeared on a black-and-white snap with putting on a sweat that wrote Big Brother inside a key.

Brandon “Frenchie” French was born to his parents in his hometown of Camden, Tennessee, the United States. But, he resides with his family in Clarksville. On 16 December 2019, Brandon shared that his father was 60 in December of 2019. Plus, he wanted to become half as cool as his father was at the time. However, no information surfaced on his mother as of this writing.

Similarly, Brandon “Frenchie” French shared the snap of his when he was a toddler. On the snap, he was with his siblings. Based on that snap, French has four siblings which included three brothers and a sister.

Brandon “Frenchie” French stands tall at a height of 6 feet 1 inch (1.85 meters). He weighed about 78 kilograms (171 lbs). Furthermore, he is a tattoo enthusiast where he inked multiple tattoos on several parts of his body. Not everyone loved the ink that he put on his body.

Back in May of 2019, Brandon French wrote a post on his Instagram. He stated, “Stop being scared of who you are. If I had a dollar for the time I heard I’m going to hell for having tattoos I’d be filthy rich! Lol #tattoos #tattoo  #tattoosleeve #tattooideas  #hunterxhunter #hunting #beyourself”

Most of his tattoos are on his arms that also include Jesus Christ and Teddy Bear.

Brandon “Frenchie” French loves documenting his daily life and post it on his social media. He could only be discovered on Instagram. On IG, he was able to garner 729 followers as of July 2021. He only posted 315 times in total most of which are related to his family and friends.

Brandon “Frenchie” French was previously in the U.S. military. But, after undisclosed years of serving in the army, he decided to become a farmer and settled in Clarksville with his family on a farm. Most of his IG snaps shared his time working on the farm and attending similar events.

As a farmer, Brandon spends most of his time with the animals. When he was not busy tending the herd, Brandon went out hunting or enjoying time with his kids. Being a farmer has taught him some life lessons which could be applicable in his life.

As a contestant of Big Brother season 23, these lessons, Brandon believes, are a must to win. In his own words, “Being a farmer, no two days are the same. You never know what to expect. I always have to evolve and change game plans daily and I have got really good at it. Set strategies are over-rated and crumble so my lifestyle fits perfectly with the Big Brother house,”

At 13, Brandon won NFL national putt pass and kick competition. He was also a proud member of the NAACP. He also has a 2-time grand national champion show bull who lived better than most people.

Reportedly, Brandon “Frenchie” French’s job as a farmer is contributing to his burgeoning net worth of at least $400 thousand.

Brandon “Frenchie” French is a family man but we couldn’t discover details on his wife. But, he has three kids; a son and two daughters. He spends plenty of time with his kids and shares the snaps of their enjoyable moments on his Instagram.

Based on his socials, Brandon is separated from his “wife” if he was ever married. Not a single woman appears on his Instagram that we would guess to be his wife. But the love of his life, his precious kids are dear to him and looking after them as a single father.

Sadly, Brandon lost his son at a young age for an undisclosed reason. So, in the memory of his son, he inked a tattoo of young Simba from The Lion King on his arm.

When asked in an interview what would he would take to the Big Boss house, the no. 1 thing was the picture of his late son because it motivated me like no other. The other two things were a fishing pole because it would be fun catching other Houseguests from the HOH balcony, and a voice recorder because everyone in that house lies and then I’d have proof of what was said.

The most difficult part of being in the show would be leaving his children behind.

There exist no details on “Frenchie” French’s girlfriend and current relationship status. Since he is leaving his kids behind someone must be looking after them, so the anonymous guardian of the kids might be his girlfriend.