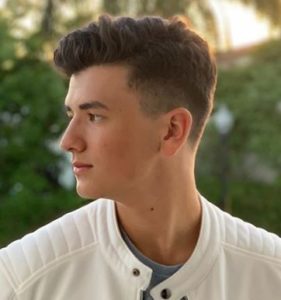 In August 2020, Mark Bontempo was in limelight as the mysterious boyfriend to the dance star Jojo Siwa. Previously, Jojo had talked about him hinting that her BF was like a dream, but it wasn’t until National Girlfriend Day 2020 he got introduced.

Mark is a singer as well as a rising TikTok star who got over 160K followers within a few days of opening his account. We may as well credit his TikTok popularity to his girlfriend Jojo who appeared on his second video over TikTok.

Get to know more about Mark Bontempo as you tag along with this short bio of him. Moreover, learn about his age, height, and parents as the article continues.

As of August 2020, Mark Bontempo was already the age of over 18. Details on his birthday and zodiac will soon be updated.

Aside from his popularity from Jojo, Mark is also an aspiring pop singer. He has a soothing voice almost comparable to that of Shawn Mendes. Furthermore, he had lots of cover songs, mostly Ed Sheeran’s songs. It might be safe to say that he was a fan of Ed.

Also, Mark can beautifully strum his guitar as he sings along.

Coming to his family, Mark Bontempo is the younger brother of social media star Madison Bontempo aka Madison Nichole Fisher. As for his other siblings, he has 2 other sisters named Marissa Bontempo and Mackenzie Bontempo. Also, he has a brother named Mason Bontempo.

In short, it’s a family of 7 (5 siblings and parents). As for his parents, Mark’s father’s name is Paul A Bontempo and his mother’s name remained unknown.

Apart from this, Mark loved his twin niece Taytum and Oakley (Madison’s daughters). He uploaded a picture with them over Instagram enjoying on a beach captioned ” 25% Italian, 25% Polish, 50% best uncle and 100% American 🇺🇸”. Can it also be a hint to his ethnicity?

Taking about his distinct features, Mark is a cute guy with dreamy green eye color. Also, he has small lips and noticeably lager ears.

As for his TikTok account, find it @mark.bontempo with over 161.3K followers and the first video uploaded on August 2. His official Facebook and Twitter accounts were not found.

Apart from being a musician, Mark had no other jobs accounted for. Being gifted with a beautiful voice, he aspires to be a pop artist one day. Also, as he embarked on his TikTok journey, he might soon be able to gain some benefits from it.

As of August 2020, Mark Bontempo’s net worth was estimated to be under $100 thousand.

In light of his education, Mark was already a high school graduate in 2020.

While Mark Bontempo and Jojo Siwa appeared as boyfriend-girlfriend in August 2020, fans speculated that they have been a pair for much longer. Reportedly, they started dating secretly before March 2020.

Just in case you don’t know about Jojo, she is a dancer, singer, actress, and social media sensation with over 11.6 million subscribers on her Youtube channel “Its JoJo Siwa”

So how was the secret let out?

Having dated for months, the duo were finally sure about each other and decided to let their fans know. As JoJo took part in the ‘put a finger down’ challenge and confessed that she wasn’t single, Mark himself posted a duet with JoJo’s challenge video, captioned :

“If it’s not me you have some explaining to do #nationalgirlfriendday.”

At the end of the video, Mark panned the camera down and we could see Jojo laying next to him. Viola!

In November 2020, Jojo Siwa announced she and Mark had called it quits. She insisted they broke up on good terms. What’s more, she even defended Mark from online criticism following their split.