Garrett Magee is a part of the trio featured on Bravo’s Backyard Envy alongside James DeSantis and Mel Brasier. And with the premiere of season 2, Garrett was back on the show turning rooftops, terraces, and yards into glorious living areas.

Also, Garrett liked to call himself “plant whisperer”. He worked his magic with plants on the show while James handled business relations and Mel managed construction.

Divulge into the world of Garrett Magee as you tag along with this wiki-style article. Moreover, get to know about his age, height, and partner as the article proceeds.

Celebrating his birthday in early May 2020, Garrett Magee never looked better at the age of 35. Furthermore, he is of Taurus zodiac.

As of 2020, Garrett lived in New York and enjoyed traveling the world.

Garrett Magee was born in Texas and raised in Tennessee. Growing up in the beautiful wooded South, he loved nature from an early age. His parents love the place and thanks to them, we are now able to find someone who loves nature dearly.

Apart from this, Garrett has three little triplet nieces. He uploaded a picture of them over his Instagram and tagged Molliehag who could be his sister.

More information on his family and siblings will soon be updated.

Coming to his distinct features, Garrett has a well-built body. He liked to keep his hair short and was fond of his mustache.

Talking about his education, Garrett studied graphic design and fine arts at the Art Institute of Chicago. After completion, he took on a job to work in corporate design for many years. But frustrated with always working in front of a computer, Garrett decided to change his career.

He then went to New York Botanical Gardens to study landscape design and honed his craft in exterior design. Garrett had found his calling as the plant specialist and co-founded the Manscapers alongside James DeSantis and Mel Brasier.

Furthermore, his most famed work until 2020 would probably be for a Brooklyn couple — irregularly shaped cedar planters bursting with Mexican feather, fountain, and maidenhair grasses. He shared his favorite gardening tip was,

“Eggshells mixed into the soil are great. They keep bugs away, like snails.”

Apart from this, Garrett appears on Backyard Envy flaunting his a green thumb. The show’s inaugural season was filled with drama and we can expect some more on season 2. However, they have earned quite an income as well. They have landed million-dollar projects including “floating meadow” installation for Maison St-Germain, and elderflower liqueur project.

Just in case you don’t know, Garrett Magee’s sexual orientation is gay. As of August 2020, Garrett was engaged to his one-year-younger partner Andrew Walko. Reportedly, Garrett first popped the question back in 2019 after dating for over 4 years. 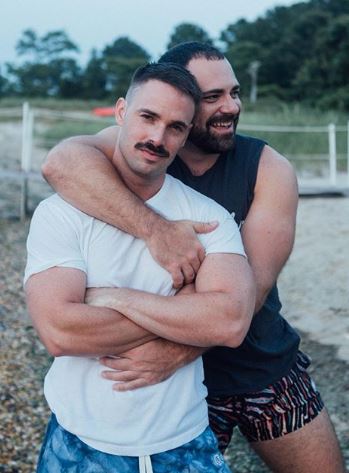 Garrett and Andrew first met at a mutual friend’s house party in New York City on Memorial Day (Also, it was the same place the lovebirds got engaged). Soon after, they became partners on Fire Island celebrating Pride in 2015. Together, they share a passion for plants and traveling the world.

The duo hadn’t fixed the wedding date as of August 2020 but was keen on tying the knot in the fall of 2020.

Little info on Garrett’s partner — Andrew has a degree in communication design and worked as the associate creative director for UM Worldwide. Also, he worked with many brands like Starbucks, Microsoft, Spotify, and Youtube as well.

Melissa Brasier shot into limelight as a cast member of Bravo‘s Backyard Envy. With her expertise in...