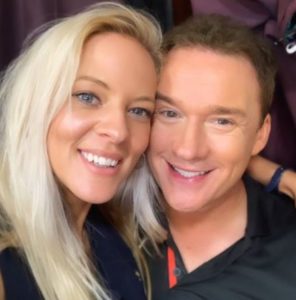 Russell Watson arrived at the castle of I’m A Celebrity as a late arrival in November 2020. And from that point on, his relationship and dating life has been the center of focus.

For that, scroll down this wiki-article based on his life that also includes information on his past relationships and details of his wife, Louise Harris.

Russell Watson was born to his father Tim and his mother Nola on 24 November 1966. He turned 53 years old while celebrating his birthday in November of 2019. As reported by The Sun, he was born in Gildersome, Yorkshire, the United Kingdom.

While not many details have been shared on his parents, Russell noted Tim was a factory worker and had a job as a welder who was a laid back type of guy. As for Nola, she worked at Woolworths but quit the job to take care of her kids.

Moving on, Russell and his only sibling, his sister Hayley grew up in Salford, Greater Manchester. As of this writing, his sister worked for him as his business manager.

More From Us: Emerald Fennell Husband, Baby, Net Worth, Height

Russell Watson’s good looks are one of many attributes which he possessed that received compliments from fans all over the world. He stood tall at the height of 5 feet 11 inches (1.80 meters), a couple of inches than his wife Louise Harris.

Moreover, Russell’s bodyweight of 78 kilograms (171 lbs) made him look hunk and suited him in any attire he desired to put on. In 2007, he was rushed to the hospital by paramedics after he didn’t wake up one morning.

A year before, Russell was diagnosed with pituitary tumor surgery, but it grew back again and hemorrhaged in three places.

With the sold-out concerts and multi-platinum album sales, Russell Watson garnered a total net worth of £4 million which is around $5.3 million.

Russell Watson grew up in a household where his mother filled the ambiance of the house with the music of Chopin, Mario Lanza, Mantovani, Schubert, and several others. This influenced him to sing songs which he started at an early age.

Russell released his debut album The Voice in May of 2001. At the time he was managed by Perry Hughes. The album topped the UK Chart for its blending element of Opera and pop genre. Also, the album went on to win Classical BRIT Awards in 2001.

As of this writing, Russell went on to release 10 studio albums and the list also included La Voce, Encore, and Amore Musica.

Songs such as Where My Heart Will Take Me, Someone to Remember Me, and You Raise Me Up was some of his iconic songs to date.

Who Is Russell Watson, Louise Harris?

Russell Watson married his first wife Helen Watson in 1993, at the age of 23. The couple stayed married until their divorce in 2002.

During that period, the married pair went on having two kids: Hannah Watson and Rebecca Watson. Following the parting ways with his first wife, he also romantically linked with the few people in between.

Roxanna Valerio from New York, Joy Montgomery a Canadian barmaid, Faye Tozer, and Sian Reeves were some of his short-lived relationships.

But in early 2010, Russell Watson met his now second wife Louise Harris. As reported, the couple met each other when Russell was taking pictures with his fan. At that moment, he asked Louise to go out for a dinner with him and they have been together ever since.

Despite the age gap of 22 years, the couple hit it off.

The dating couple went on to get engaged in 2014. The engaged couple tied knots on 19th August 2015 in the picturesque village of Benahavis, Spain. Altogether, the couple has been together for almost 10 years.

Louise stunned everyone with her ivory Ronald Royce wedding gown added with a crystal tiara and Swarovski crystal shoes.

The only social media platform Louise Watson is on is Twitter where she goes by @sainlouise1.

As for Louise Harris, she was born to her father Ian Harris and Julie Harris. Other than names, no further information on her parents surfaced as of this writing.

Moreover, Louise grew up with her sister Beth Harris. Beth Harris is the owner and creative director of Halo Fabulous.

Whereas Louise is an equestrian and often posts pictures and videos related to that on her Twitter.