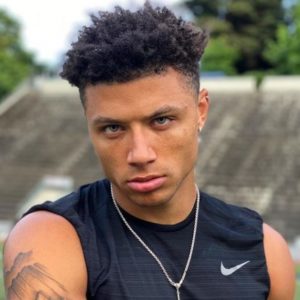 The big Netflix hit Too Hot To Handle premiered its second season on June 23, 2021. And from the jump, it promised to be even more spicy and interesting than the last iteration.

Like the previous season, the new contestants stayed at an 8,000 square-foot beach villa located in Turks Caicos for four weeks. Those who manage to avoid sex or any forms of physical contact with each other end up getting a handsome $100,000.

People exclusively revealed the 10 fresh faces that will be competing in the Season 2 of Too Hot To Handle on June 15, 2021. Chase DeMoor is one of the interesting contestants who the viewers should definitely watch out for. Let’s learn about his age, net worth, and journey to Too Hot To Handle in this Chase DeMoor wiki.

Chase DeMoor On Too Hot To Handle

Fans saw Chase DeMoor in action beginning on the 1st episode of Too Hot To Handle, which premiered on June 23, 2021.

Coming into the hit Netflix show, many believed it could be really tough for Chase to prevent himself from indulging in sexual activities with the other contestants. According to People, Chase describes his sex drive as 100 out of 10.

If he wants a chance to claim that $100,000 amount at the end of the show, he might have to sharpen his conversation skills instead of focusing on the physical side of things.

Chase DeMoor was born in 1996 which made him 25 years of age in 2021. He celebrates his birthday on the 12th of June every year. Going by his June 12th birthday, his zodiac sign should be Gemini.

Chase was born and raised in Eatonville, Washington. The reality TV star had a tragic childhood and a not-so-good upbringing.

Chase DeMoor lost his father when was only 10-years-old. Growing up, he watched his mom, Jennifer DeMoor Torrence, struggle to provide necessary things to him and his three siblings. Furthermore, one of his elder brothers spent a lot of time locked inside the bars which caused further difficulty.

Chase’s late grandfather Donald Lee DeMoor helped him and his siblings in upbringing.

Furthermore, in an interview, Chase also revealed his football coach Charlie Roach filled up the void left by his dad and became the father he never had.

Chase DeMoor stands at a height of 6 feet 5 inches and weighs no more than 245 pounds. His distinctive features would be his athletic body and beautiful hazel eyes.

Chase is a popular personality on the Internet. Noted for having a huge reach on Tiktok, he is also available on Instagram, Twitter, and Facebook. His reach on those platforms was fine in 2021.

Besides being a reality TV star, Chase DeMoor is a professional footballer. For education, Chase went to the College of Siskiyous and Central Washington University.

While we are still unaware of what Chase studied in his high school and undergrad school, we do know that he played football there. Reportedly, Chase began playing football at the young age of 14.

According to nickiswift.com, Chase plays for the Houston Lineman on the Spring League.

At one time, the pro footballer was also scouted by NFL. In an interview with NFL Draft Blitz, he revealed that he would be training at Tforce Athletics in Seattle Washington for the NFL Draft.

Some of Chase’s career highlights are the 2018 ST Player of the year, the 2018 NCAA Blocked Kicks leader, the 2018 FCS All American bowl select, and the 2019 All-American Tropical bowl select.

For his time at The College of Siskiyous, Chase DeMoor was paid a total of $1.6 thousand. While we don’t know how much Montreal Alouettes paid Chase, an average salary of a footballer playing for Montreal Alouettes for one season is around $81 thousand.

Does Chase DeMoor Have A Girlfriend?

As of June 2021, it looked like Chase DeMoor did not have any girlfriends. Recently, the professional footballer has also not been dating anyone.

However, one cannot say what the situation will be after he returns from Too Hot to Handle. We have seen many relationships getting ruined, some being formed after the end of these types of shows. Who knows Chase might spark a romantic affair with one of his costars in the show.