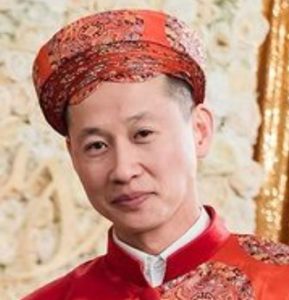 The brand new 13th season of Lifetime‘s reality TV drama Married at First Sight has already got a premiere date on July 21, 2021, but fortunately, fans don’t have to wait till then to gain insight into new couples; The Season 13 Matchmaking Special, which will provide an in-depth exploration of the matchmaking process, will debut on July 7, 2021.

For the new iteration, the matchmaking experts have paired five Houston-based couples, who will go from wedding ceremony to honeymoon and moving in together, all to decide between divorce and happily ever after.

One of the unique couples this year, Johnny Lam and Bao Huong Hoang, are the show’s first Asian-American couple. Let’s learn about their relationship and if they are still together in this Johnny Lam wiki. Also, get insights into Johnny’s age, net worth, and parents’ information.

Reportedly, Johnny Lam was 35 years of age in June 2021; and so was his partner Bao. We know that Johnny celebrates his birthday on the 29th of July every year. Going by his July 29th birthday, his zodiac sign should be Leo.

Johnny Lam was born in Houston, Texas. Johnny’s parents had divorced when he was very young and as a result, he was raised by a hard-working single mother.

Johnny also had one sibling, a sister, by his side while growing up.

While we don’t know any details on Johnny’s mother and sister, Diana Lam, Anh Lam, Minh Lam are the names of Johnny’s family members.

Johnny Lam stands at an average height of 5 feet 9 inches and weighs no more than 70 kilograms. Furthermore, his distinctive physical characteristics would be his dark black hair and brown eyes.

Though Johnny was available on all big social media platforms including Instagram, Facebook, and Twitter, none of his socials were public. As a result, we do not know how active he is on social media.

Coming to the numbers, as of June 2021, the MAFS star has 1.1 thousand followers on Instagram and 584 followers on Twitter.

By profession, Johnny Lam is an Informational Technology Project Manager. Since Jan 2021, he has been working at Musket Corporation. While we don’t know how much Musket Corporation pays Johnny for the job, an IT manager earns around $82,000 on an average in a year in the US.

Previously, he worked for the same company as a business analyst.

Johnny’s first job was at Progressive Insurance as a Senior Claims Adjuster. He worked there from July 2007 to July 2011. Then, he went on to work as a Project Manager at Impression Bridal.

After his contract at Impression Bridal ended in February 2012, Johnny worked at Shell as an operations analyst. Furthermore, from May 2014 to July 2015, Johnny was a Senior Associate at Macquarie Group.

For education, Johnny joined the University of Texas at Austin in 2003 and graduated in 2007 with a bachelor’s degree of Science in Advertising.

Coming into the Lifetime show Married at First Sight, both Johnny and his match Bao were extremely happy with Bao even teasing the new season of MAFS on June 10, 2021, on Facebook.

Unlike many other seasons, the viewers are elated to finally see Lifetime bringing diversity to the show.

Johnny and Bao are not much different in what they want in their significant other. From what we know, both of them want to find the perfect life partner in one go.

Johnny’s partner Bao was born in Texas to her Vietnamese refugee parents and was raised there too. She never wanted to get married until in her 30s, when she suddenly had a change of heart and wanted to find a perfect partner for her.

Johnny, on the other hand, is aware of the devastating effects of divorce through his life experiences. He would like to marry just once and, in that single attempt, would like to have the perfect match. Furthermore, we also know that Johnny tried to find love through various dating apps. Having found no success from the dating apps, he let the experts take the reins. 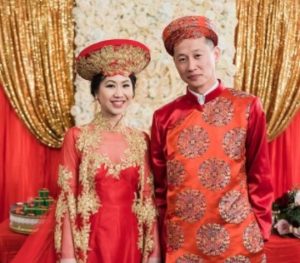 Johnny and his match Bao in a traditional Vietnamese dressing during their nuptials in the show Married at First Sight.

As the show’s first Asian-American couple,  they will tie the wedding knot in a traditional Asian ceremony.