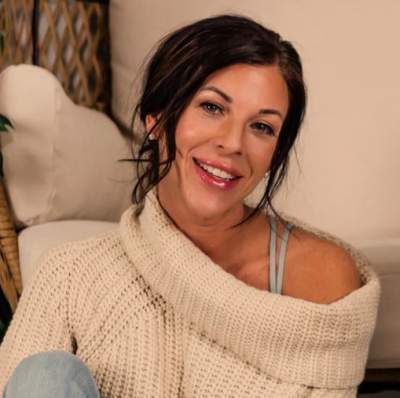 TLC’s new series You, Me & My Ex premiered on June 20, 2021. The unique premise of the reality TV program follows five couples dealing with an ex who is still complicatedly connected to and very much a part of their daily lives.

Among them is John, April, John’s ex-wife Loren and Roy, April’s ex-husband.

Here’s this April Kirk Wiki writing about the reality star which in detail explains the situation with April, her husband John, and their respective exes.

Born supposedly a determined and stable-natured Taurus born, April Kirk grew up celebrating her birthday every year on April 21st. This is probably the reason she was named April.

“I am forever 26! There is no particular reason for choosing that age, nothing completely and utterly magical happened to me at that time, I just love the number. I love it so much that I have celebrated being 26 for over 10 years.”

[You, Me & My Ex] April Kirk Parents, Siblings

April Kirk grew up a southern girl in the small town of Decatur in Tennessee. As a child of divorced parents, she spent most of her childhood in a blended family.

On Jan. 3, 2018, April and her sister Tiffany received the most “terrible” news that their youngest sibling, brother of 23, passed away very unexpectedly. In an Instagram post, on that day, April had recalled how her brother reminded her so much of her dad. Searching for the silver lining amidst the crisis, she had then concluded, “I’m sure they are catching up in Heaven as we speak.”

Thus, April’s brother had preceded in death by their father who also suffered an untimely death back on Feb. 12, 2015.

One may discover April Kirk on her separately on her personal and business accounts (Co-Parenting Past Chaos) on Instagram as well as Facebook. So, catch on her on the platforms become “a hard worker, a loving and devoted wife, mother, and an honest friend” just as she claims to be.

April Kirk with a degree in Criminal Justice and a career in dentistry had more than an estimated $500K net worth when she chose to be on You, Me & My Ex.

Besides, the office manager at a Beautiful Smile with Dr. Gina Mancini also mentioned organization, planning, and over-thinking as her part-time jobs.

Also, together with Loren, April founded their business name Wife’s Tales which is branched separately into its blogs, podcast, and soon-to-be releasing merchandise.

She studied Criminal Justice/Psychology at Chaminade University of Honolulu and went to Meigs County High School from 1995 – 1999.

Being a military spouse has allowed me to travel and call many places home.

April Kirk explained it was blood, sweat, tears, death, and divorces that have made her who she is today and admitted she was happily married to her best friend and military spouse (John Kirk) in a blog published in Oct. 2020.

From the day when April and John Kirk posed as the bride and groom (PIC: April’s FB)

At first, Loren Kirk and John were married and had three kids together. And they lived next door to April and her ex-husband Roy Farner, who also had three kids. Both the couples were having tough times in their marriage and John and April ended up falling in love.

Loren and Roy felt blindsided by their spouses’ connection, things got “rocky” and eventually both the couples divorced. April and John got married. Nevertheless, this did not help with the complicating scene as Roy continued to stay close with April. And to John’s dismay, April continued to do Roy’s taxes and make him “honey-do” lists. The divorced pair even got matching tattoos.

But with time, John and April’s relationship found its designated meaning. And they were even planning to honor their love in a big way by having the wedding they always wanted but never had, and by inviting their exes (Loren and Roy) to celebrate their marriage.

Still, as the TLC’s You, Me & My Ex portrays, April, John, Roy, and Loren continued to pose as a “big blended family” as dubbed by April’s daughter Hayli.

In fact, April and Loren happen to business partners at Co-Parenting Past Chaos.

It must be a miracle story, that TLC covers, how following 2.5 years of a “nasty” custody battle, they learned to be civil with one another.

Now (2021) living in Jacksonville, North Carolina, April Kirk is the mother to daughters Hayli Gibson and Taylar Turner and a son Tanner Farner.

Clearly, all of the kids were born from her marriage to ex-husband Roy Farner.

Hayli is a hairstylist at Wild Olive Salon Jacksonville and a party host/manager at Altitude Trampoline Park – Jacksonville. Taylar, meanwhile, seemed to be the youngest of the daughters. She went to Whiteoak High School.