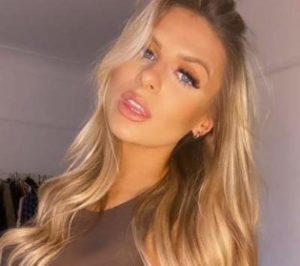 Realizing that she never had the best luck in love, Chloe Burrows decided to take on a different road to fall in love this time. This way, she found herself competing on the seventh season of Love Island among Aaron Francis, Shannon Singh, Jake Cornish, Sharon Gaffka, Liberty Poole, Toby Aromolaran, Kaz Kamwi, Brad McClelland, Hugo Hammond, Faye Winter, and others.

Find out more about the reality star in this Chloe Burrows Wiki.

So, it is established, Chloe Burrows is one of the contestants on the ever-anticipated season of ITV’s Love Island (starting on June 28, 2021). And as per the show’s premise, Chloe, after entering the villa in Majorca with other singletons, will try to find the match of her dreams. In case she reaches the finish line she will also get to share the £50,000 with other winners.

Chloe Burrow’s ideal boyfriend is funny, caring, and a bit of a gym buff. Also, she wants to be with a person who she can trust to not ditch her as she believes she is “quite a big character and quite loud.” So, for her, the man by her side would have to be “as loud, if not more.”

“I could never be with someone quiet. Someone that gives you a bit back.”

Chloe proudly spoke about her affair with a married father in her intro video for Love Island.

She met someone at work and thought it was love at first sight until my manager reminded her of his wife and kids. “Doesn’t mean I don’t drunk call him most weekends”, commented controversially.

In fact, Chloe shared she and the married guy dated for a while and she had “absolutely no idea he was married”. Claiming she is not a homewrecker, she explained:

That been said, the man, who The Sun was not ready to name, “strenuously” denied having had any “affair” with Chloe.

Chloe cited she is partial to married men as she believes most of the men in her city “are married or have girlfriends”. Again of course she added giggling that even these men are “not really off-limits.”

Lastly, she warned any girl, married or not, should be wary of the man around her.

After all that she said on a promotional video, she was being torn apart online “for openly advocating cheating.”

Chloe Burrows shares the same birthday with Aaron Francis, her Libra buddy, and co-star from Love Island. Exactly a year older than him, she reached the age of 25 in 2020, celebrating her birthday every year on Sep. 29th.

Chloe Burrows hails from Bicester, which is a town and civil parish in the Cherwell district of northeastern Oxfordshire in England.

Her family and friends describe her as someone who is always the “funny one in a situation.” To which, Chloe also confirmed that she “always tries to make everyone laugh” and is “bubbly and always doing something.”

For siblings, Chloe has a sister named Bridget who is on Instagram @bridieburrows.

At the time of this writing, one could not tell what her parents are like.

Chloe Burrows stands to under 5’4” in height. She candidly stated that some part of her measurements is not natural as she underwent cosmetic surgery.

She confessed to getting a boob job (in 2020) and corrected the only feature she felt uncomfortable with.

Chloe elaborated on the ‘uncomfortable part’ citing— she felt like a “joke” when she put a bra on. That even the smallest of bras did not fit her.

“At one point I was at university and 20 and I bought a 14-year-old’s bra from New Look because I needed a strapless one and there wasn’t any.”

So she decided to get breast augmentation and went from 32A to 32D.

Meanwhile, Chloe joined Twitter @Chloe___Burrows only in May 2021 and thus enjoyed 58 followers.

At the time, Chloe did not seem to be on TikTok.

Chloe Burrows had less than an estimated $150K net worth before her Love Island stint.

She graduated from university with a first-class degree in Marketing back in 2018. Since then, she has pursued a career as a financial services marketing executive.

From what glassdoor.com calculated, the national average salary for someone like Chloe working as a Marketing Executive in the United Kingdom made on an average salary of £30,291.

While she doesn’t post much about her job, she has definitely struck up the perfect work-life balance.