Meet freestyle swimming champion, Simone Manuel, who took many by surprise by her decision to not swim the 200 free at the 2021 U.S. Olympic Trials.

Simone was among the multiple big-name (including Olivia Smoliga and Catie DeLoof) absent from the heats of the women’s 200 freestyle on June 15, 2021.

In the meantime, while Simone focuses on other events coming up, here’s a Simone Manuel Biography covering scoops from her personal life.

Simone Manuel was born in Houston, Texas, and grew up later in Sugar Land, Texas.

Her parents are named Marc and Sharron Manuel. They have been super proud that Simone became the first African American woman to win gold at an individual swimming event in the Olympics. (Simone is also the first American woman to have won the women’s 100-meter freestyle since 1984.)

Simone’s dad played basketball in college and her mom Simone too was a competitive athlete throughout high school. But she did not follow an athletic career in college. She is originally from New Orleans.

So, due to the couple’s affinity with sports, it was only natural they introduce all three of their children to all sorts of sports. Both of Simone’s older brothers Christopher and Ryan also happens to be star athletes.

Naturally being a mother, Sharron is very attentive and concerned for her youngest. Therefore, from sharing the recipe for Simone’s favorite Cajun shrimp pasta dish to claiming that Simone’s race would not stop her from attaining stardom, the matriarch has been voicing as well as backing up her young star.

That been said it was still not clear if the proud parents are descendants of citizens of Haiti. But as we know Simone acquires African American heritage, and her mother is from New Orleans, it just seems like another made-up myth.

The four-time Olympic medalist Simone Manuel had an estimated $3 million net worth by Aug. 2016. Back at the time, while chasing national as well as world records in freestyle swimming, she was also looking to major in Communications at Stanford.

Lately (June 2021), following Simone’s no-show at 200 Free, her coach at Stanford Greg Meehan clarified that Simone was never planning on competing at the 200 free through all three rounds.

But, the head coach of the U.S. women at the Olympics also added she was considering Simone for a spot on the 800 free relays at the Olympics. And if that were to come true, it will be because of Simone’s career accomplishments in practice and informal racing.

Simone Manuel had definitely not been married before the time of this writing. But she was in an open relationship with her boyfriend Denzel Franklin.

Who Is Simone Manuel Boyfriend?

Back in 2017, Simone Manuel had introduced Denzel Franklin as her boyfriend for the very first time on social media.

This way, the world came to know Denzel played football for Stanford University, where Simone also studied. Denzel, meanwhile, attended the college from 2014 – 2018 for his Bachelor of Arts in Urban Studies as well.

Further, according to his LinkedIn, he is a full-time project engineer at Toll Brothers in Santa Clara, California. Also, an account representative at Uber Eats, Denzel is from Atlanta, Georgia. And he is currently (2021) based in East Palo Alto, California.

Now and then, he appears on his college sweetheart Simone’s Instagram. They were last seen together during 2020’s Christmas. And before that, every time Denzel got a year older and wiser, Simone took to her socials to write the likes of:

“Happy Birthday, Love! Thank you for holding me down, lifting me up, and everything in between. There’s absolutely no one like you. I’m blessed! ❤️” 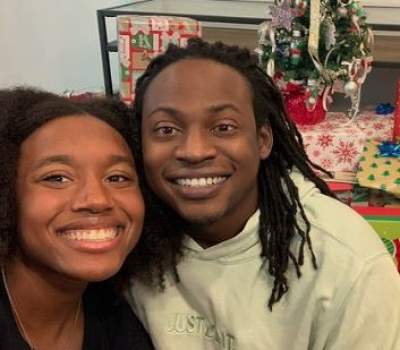 Also, back in July 2018, they were excited to be celebrating their pets Shaka and Zulu’s two months anniversary. Talking to NBC Sports, Simone had revealed it was not her but Denzel who picked the names for their pet snails.