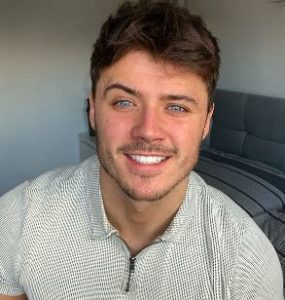 Brad McClelland is the cast member of Love Island UK 2021. He has been widely shared to be a genuine guy inside and out. Ever since the announcement of his debut in the show, fans are looking forward to learning more about his life, family, and his jobs.

Delve into this Brad McClelland Wiki where we explore details thee details.

Brad McClelland joined the cast of Love Island UK 2021 and shared about the excitement of face-to-face dating after staying inside for a year due to quarantine. His bio described himself as a “gym-goer-and-coffee-lover.”

He is a self pro-claimed easy-going and laid-back type of guy. The show marked his debut as a reality star and we’re excited to witness what other endeavors he will be pursuing in the future.

Brad will be accompanied by casts from different backgrounds like a luxury event planner, OnlyFans model, fashion blogger, the disabled contestant who played cricket, and several others.

His friends and family are already rooting for his success. On user on Facebook, Tracey Prime wrote: “The loveliest lad you could ever meet x good luck Brad xx.”

Edmond CeCe wrote: “He really is a genuine lovely guy.. always has been x.”

As for Brad McClelland’s ideal girlfriend, his celebrity crushes were Sommer Ray and Megan Fox. Furthermore, he also fancied fellow islanders Zara McDermott as his type.

In the Love Island speed dating video, he talked about his ideal type. He exclaimed: “My type? ooof, good question. My ex was blonde hair, blue eyes, fair skin whereas my type in my head is the opposite.”

Furthermore, he also shared that the last time he had sex was at the end of 2019.

Brad McClelland turned 26 years old in June of 2021. He celebrates his birthday every year on 10 June. This made him a Gemini by zodiac sign.

Brad McClelland was born to his single mother Kimberely McClelland who hails from his hometown of Northumberland, United Kingdom.

The McClelland family once made headlines in the local news when Brad’s younger brother Mackenzie McClelland lit their family house on fire when he was 2 in May of 2006. Mackenzie was playing with a lighter and the sofa caught the fire which burned down the house.

As the story goes, the only thing they were able to keep safe from the ablaze was the clothes they had on their back. But, the community they lived in stood up to help a family survive the turmoil. They were left homeless for weeks.

The family moved to Kimberley’s disabled mother Joyce’s home for a temporary time period. At the time they used to live in Glendale, Amble. The manager of Harbour Inn, Lillian Anderson, offered the help they couldn’t refuse.

His mother received temporary treatment at Wansbeck General Hospital for suffocating due to her asthmatic condition.

According to Brad McClelland’s posts on Instagram, he stands tall at a height of 6 feet 2 (1.87 meters). He is a fitness enthusiast who took different challenges regarding weight loss. In 2018. she shared a post where he lost 10.9 kilograms (24 lbs).

He also won the 28 Day Challenge in Aesthetically Trained’s September’s Group with a prize package of £500.

Brad McClelland is on Instagram with 25k followers as of 24th June 2021. He posted 137 times on his IG profile @brad_mcclell. According to his IG bio, he also created a Twitter platform that couldn’t be reached, but he goes by @brad__mcclell.

Furthermore, Brad is also on Facebook where he only has two posts in total. He last posted on Facebook on 21 June 2021.
Moreover, there also exists a TikTok account based on his name with only 2 followers. But, it couldn’t be verified if it actually belonged to him or not.

Talking about Brad McClelland’s job, he joined EVERLONG PAINT (NE) LIMITED in March of 2014. He worked as the supervisor of a chalk paint company where he was the in-charge of the warehouse where he received and dispatched products. He also used the products for painting/upcycling homes and furniture.

Then he joined Sodexo in November of 2017 as Prison Officer. His work with the establishment as a contractor’s escort.

From August 2018 to January 2019, Brad joined Northern Structures Limited as Steel Erector. He worked in the company only for six months. Immediately thereafter, he has been working for A.T. Painting & Decorating.

Other than his job as labor, Brad was also a team member of Alnwick Town AFC.

His net worth, meanwhile, surpassed $150 thousand.

Brad McClelland attended Coquet High School. After graduation, he enrolled at James Calvert Spence College in 2008. Later, in 2011, he graduated from college.