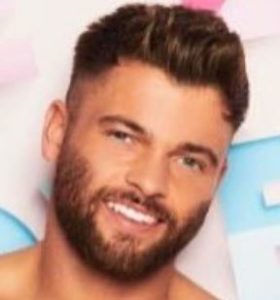 After a long hiatus due to COVID lockdown, Love Island, the popular British dating show, is back on tv. It is set to premiere on 28 June 2021 on ITV2. And among the new batch of hot love-seeking contestants was Jake Cornish, a water engineer from Weston-super-Mare, or just Weston, in Somerset, England.

Read everything you need to know about the reality star in this Jake Cornish wiki, including his age, height, net worth, etc.

Jake was among the first 11 Islanders revealed by the showrunner of Love Island about a week before the show’s premiere. The show was set to return after a long hiatus on 28 June 2021.

So far 11 participants have been announced that are set to appear from the first episode of the show. The other 10 participants, apart from Jake, were Sharon Gaffka, Aaron Francis, Liberty Poole, Shannon Singh, Hugo Hammond, Toby Aromolaran, Kaz Kamwi, Brad McClelland, Faye Winter, and Chloe Burrows have been confirmed.

According to an interview that appeared on ITV’s profile of him, Jake Cornish himself said the following about his idea girlfriend:

“Looks-wise, always gone for blondes. But for me, the main thing is having respect and having good fun, and someone who will be loyal to you. I’ve had messages from girls that have got boyfriends and husbands. This is why I don’t trust anyone. Someone who is loyal really. But when I’m single, I like having a good time!”

Furthermore, Jake also mentioned that his celebrity crush was Billie Faiers. And that he was once in a serious relationship for over seven years. However, by the time the COVID pandemic arrived, he was broken up and alone. And he was on Love Island to find love.

Another curious thing about Jake was that he had a peculiar foot fetish. In his introduction video for the show, Jake revealed that he loves to suck toes.

We did not know the name of Jake Cornish’s family, but it seems that he was really close with both of his parents. If you peek into Instagram (see details below), dear readers, you will find that he often goes to beaches with his mother and addresses his father as “mate” or “boy”.

His parents have been married for over 20 years. And his father turned 52 years of age, in September 2020. His grandfather, Michael Esmond Cornish, passed away in March 2015. Jake had a close relationship with him as well.

Apart from his parents and grandparents, Jake has one sibling known sibling, an elder sister called Paige Cornish. Paige was already married and had two little kids, Ava and Ariyah. Jake also seems to have other family members (most likely cousins) named Ethan Cornish and Lee Cornish.

Apart from being a son, a sibling and a cousin, Jake is also a proud uncle of a lot of nieces and nephews.

Jake’s hometown is Weston-super-Mare, a seaside town in Somerset county of England, 18 miles from the city of Bristol.

Jake Cornish is quite a tall guy, standing at a height of 5 ft 11 inches. His other physical features include dark brown hair, grey eyes, and a ripped body. Jake also has tattoos all over his body. There is a really large one on his left arm and one slightly smaller one on his right abdomen.

Jake is incredibly handsome, but he should not be confused with Jake Cornish the model from Florida, United States.

Jake Cornish’s social media (mostly Instagram) was increasing rapidly since the announcement of his Love Island appearance. As of 24 June 2021, he had over 14.1k followers on his Instagram @jakecornish7. He used his Instagram a lot to promote himself and Love Island a lot.

He was not really significant in other social media platforms. Jake was present on Twitter as @Jake_Cornish7 but he had only 80 followers. He did not seem to be present on either Tiktok or Facebook.

Any professional graduating with relevant engineering or science degree can be a water engineering but they must have some expertise on the subject of civil engineering. The average salary of a water engineer in the UK was about £24 thousand to £32 thousand. With experience, the salary may rise to over £60 thousand.