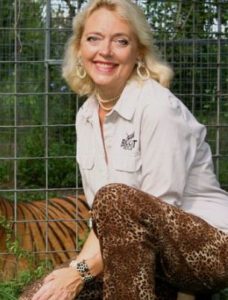 Netflix’s Tiger King: Murder Mayhem and Madness pointed the spotlight at several individuals involved. Out of many, Carole Baskin, Joe Exotic’s sworn enemy is one of the highlighted.

The animal rights advocate stood as a barrier between Joe’s dream to establish a show while exploiting exotic animals. Because of the reason he had plotted to have her killed which didn’t end well for Joe Exotic.

Welcome to the wiki-style article of Carole Baskin where we explore the personal life and her connection with the private zoo owner Joe Exotic.

Carole Ann Stairs was born on 6 June 1961 in Tampa, Florida, the United States. She had immense love for strayed animals. She even dreamt of becoming a veterinarian in her younger days but it all changed when she ran away from home.

Carole was employed in a department store and grew closer to her boss Mike Murdock. Eventually, two eloped when she was 17.

Mike, her husband, was very possessive of her. He wouldn’t let her find a new job and prevented her from running around.

Not fazed by the obstacles, Carole began tending and breeding Persian and Himalayan show cats. She started rehabbing injured bobcats. These activities occupied her and generated income to support her from home.

She had a daughter with him, Jamie Veronica Murdock.

Carole Baskin was presented with a chance to escape away one night. While she was rushing to get away, she stumbled across a mystery man who offered her help.

The pair shared the night in a motel, where she had grown affectionate towards him.

First, he introduced to Carole as Bob Martin but, it turned out he was Jack Donald Lewis AKA Don Lewis, a rich businessman. The couple got married in 1991.

Don helped Carole to follow her passion, which was rescuing animals. He saved a bobcat at an auction from a bidder who had planned to stuff him.

The joint quest of protecting animals began when Carole and Don were disgusted by the condition of Minnesota bobcat breeder when they were visiting the place. They had 56 bob kittens kept in the worst condition possible.

Don, being a millionaire, bought all of them. Like Joe’s private zoo, they had also bought 40-acre land to form a sanctuary named Big Cat Rescue. Through that, she gained prominence among animal rights activists.

Don and Carole Baskin’s marriage hit the troubled waters over the difference in the plans for the Big Cat Rescue.  While Don was looking forward to being profitable, Carole was in the polar opposite of it.

The escalated fight between the two ended up with Don getting a restraining order against Carole. Lewis disappeared in 1997.

Lewis’s car was found in the airport but there was no record of him boarding a flight.

Don’s children from a previous marriage, accused her of murdering and feeding him to her cats. His children and Carole fought for the ownership of the estate which she won eventually. 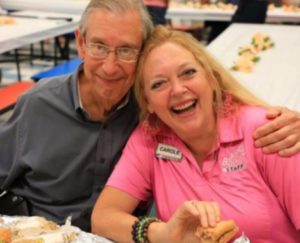 Howard and Carole in 2019 (Pic: bigcatsrescue.com)

They met each other at a cocktail party at a local aquarium. Howard was an MBA graduate and management consultant. The two eloped in a wedding ceremony organized on a beach. They went for a honeymoon in the Virgin Islands.

Around this time, Joe was gaining recognition with his traveling animal show.

Joe Exotic made it to the list of Carole Baskin around 2009. He was addressed with several names and known for hosting cub-petting shows in malls which Carole and other activists had strictly forbidden.

Activists like Carole had made hard for Joe to maintain his sanctuary. And frequent inspections and reports were getting in his nerve.

The breaking point of the feud was when Joe started using the name and logo of Big Cat Rescue. When she got surprising calls, she sued Joe in federal court for trademark violation in February of 2011.

In 2013, Carole came victorious winning $1 million as a court-ordered compensation.

This was the moment when then feud between Joe Exotic and Carole Baskin became personal.

Ashely ratted Joe out leaving a voice message to Carole about the plan for her murder. And James was spying Joe on behalf of federal agencies.

James Garretson was going to let Joe meet a hit-man- a secret agent, Joe got ripped off by his employees who were paid in advance to put a bullet in Carole’s head. Faded up and tired with everything, Joe moved to Florida with his husband Dillon Passage.

He was tracked down and arrested for plotting a murder of Carole Baskin in 2018.

The Joe Exotic trial started in 2019. And he was sentenced to prison for 22 years in federal prison.

What Is Carole Baskin Doing Now?

Carole Baskin who had feared for the protection of her life breathed an air of relief when Joe was sentenced. She is carrying on holding the position of CEO and founder of Big Cat Rescue.

In 2019, she launched an augmented reality zoo at the Westfield Citrus Park Shopping Center. Her dreams to see animals free and without being captivated with this marvel of technology.

The visitor could experience wildlife with electronic headsets.

Carole’s daughter Jamie, who after graduating lent her hands to Carole in her quest to protect animals. Her husband serves as an advisory board chairman.