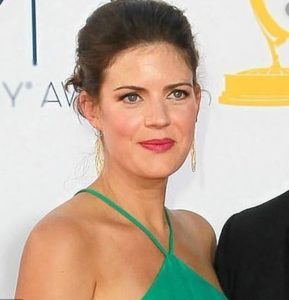 Siri Pinter and husband Carson Daly welcomed their fourth bundle of joy on 26th March 2020. Instagramming from the hospital, the mask-clad parents posed next to their newborn daughter Goldie Patricia Daly.

Bron precisely on 4:08 pm (ET), baby Goldie weighed 8.2 pounds and measured 20 inches long at the time of her birth.

Referencing the Coronavirus pandemic, Carson shouted out “incredibly brave & selfless medical staff at our hospital in New York.” Admittedly, the arrival of Goldie was a bittersweet event for the married couple.

On 20th September 2019, Siri Pinter and her husband, Carson Daly surprised the fans with baby news.

While reading aloud the “Pop Start” segment on “Today,” Carson cheekily shared that Siri was pregnant with the duo’s fourth child. In his own words,

“And finally, Siri Daly, my incredible wife, she’s gearing up for a big spring because that’s when she’s going to give birth to our fourth and newest member of the Daly family…”

Everyone — including his co-hosts Hoda Kotb, Craig Melvin, and pregnant Dylan Dreyer — was taken aback by the announcement.

When his co-hosts approached to hug him, Carson jokingly pleaded the trio to embrace Siri instead.

Following the announcement, the parents-of-four-to-be professed happiness with the prospect of a growing family. 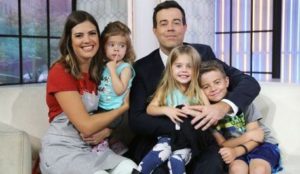 Siri first met her first husband Carson in the mid-2000s. After seven or years of dating, the beloved TV host finally popped the big question.

Following two years as an engaged duo, Siri and then-fiance Carson got secretly married in 2015 on Christmas Eve.

On the day of her wedding, Siri dazzled the guests by donning a beautiful sleeveless gown. Meanwhile, her groom appeared every bit dapper in a traditional tuxedo.

A renowned TV actor, her biological father Mark divorced her mother Gretchen and went on to marry twice.

In addition to playing older sister to twins Dylan and Hannah, Siri is also half-siblings with Kesley Crouch and Georgia Pinter. Morgan — one of her dad’s six children — committed suicide in 2018.

What Does Siri Pinter Do? Her Net Worth, Height & Food Blog

Siri Pinter — about five feet & seven inches (170 cm) in height — went to college in Wisconsin. After graduation, she moved to Los Angeles, only to shift to Long Island, New York in 2014 following her engagement.

Unsurprisingly though, Siri dons far too many hats to count. Besides being an exceptional flood blogger, she is also a published author.

The book “Siriously Delicious: 100 Nutritious (and Not So Nutritious) Simple Recipes for the Real Home Cook” is her biggest pride and joy.

At the height of her writing career, Siri wrote and produced numerous TV shows including “Fraiser,” “Committed,” “Nobody’s Watching,” and “Last Comic Standing.”

Thanks to the food blogging gigs and writing jobs, Siri flaunts a reported $900 thousand net worth on paper. That said, she is equally deserving of Carson Daly’s $40 million fortune.