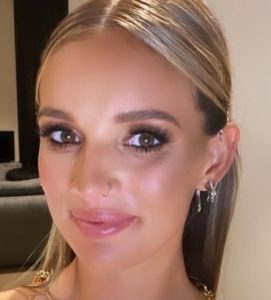 If you have been watching Bravo‘s reality TV drama Below Deck Sailing Yacht, the spin-off of the original Below Deck, then you are probably aware of how the stewardess Alli Dore has been successful to be a fan-favorite in a short period of time since her introduction to the viewers in Season 2.

After appearing in the Bravo show for some time, several details about her family and job have been out on the Internet which many of the show’s fans have been wanting to know. Along with such information, some information about her dating life has also come to the light.

In this Alli Dore wiki below, we will be discussing all that. Therefore, bear with us for a little time more to know everything about Alli.

As of Sept 2021, we had no idea about Alli Dore’s age. However, we do know that she celebrates her birthday on the 12th of July every year. Her zodiac sign is Cancer.

Alli Dore Nationality: Where Is She From?

Alli Dore hails from Melbourne, Victoria, Australia. Thus, her nationality is Australia. Despite living in Croatia for her work, she is very close to her family members living in Australia.

Alli’s dad’s name is John and her mom goes by the name of Alannah. Alannah is the personal well-being expert and the founder of the Holistic Living Training Institute.

Apart from her parents, we know that Alli also has some siblings. However, we are not aware of how many siblings does she have.

During the episode of Below Deck: Sailing Yacht, Alli learned about her grandfather’s death through her dad. She even could not go home in such a tragic time due to COVID.

Alli Dore stands at rather a short height of 5 feet 6 inches (1.67 meters) and weighs no more than 53 kilograms. Her distinctive features would be her blonde hair and tattoos.

Coming to Alli Dore’s job history, her recent job is obviously in the TV show Below Deck Sailing Yacht. Alli works for the interior team in the Parsifal III as the third stewardess, alongside her co-stewardess Daisy Kelliher and Dani Soares.

As the third stewardess, Alli’s job is to work in the laundry room, while her co-stewardess works service upstairs.

Alli does not only receive money for the work she does, but she also receives some money as a fee from the network i.e. Bravo in the cast of Below Deck and its spinoffs.

Going back to her past jobs, it looks like she was heavily involved in environmental and social causes. A former worker at The Health Retreat, Alli worked as a volunteer at Wildlife Wonderland from 2010 to 2012.

From March 2015 to September 2015, Alli worked at World Animal Protection before moving on to work as a beauty therapist at Brazilian Butterfly.

Despite being separated from the crew members for most of the time, Alli developed a really close relationship with a lot of coworkers, more so with First Officer Gary King.

Not only were they good friends, but they also developed love and feelings for each other. As a result, Alli and Gary started dating in the show.

However, as the viewers saw, Alli’s beau at the time was also hitting on the deckhand Sydney Zaruba. When Alli learned about Gary’s one-night stand with Sydney on their first night off of the show, Alli and Gary mutually decided to halt their fling.

However, things went south when Alli found Gary with topless Sydney in the hot tub in the 7th June 2021 episode. The night ended dramatically for the couple.

Alli revealed she was shocked by Gary’s post-split behavior. Alli added that she had called things off with Gary out of respect for Sydney’s feelings but in return, all she got was disrespect to her own feelings.

She and Gary were never able to come back from the incident. Reportedly, the third stew has already found a new boyfriend for herself.

Who Is Alli Dore Boyfriend?

While Alli Dore was in the middle of a love triangle with Gary and Sydney, she was caught hooking up with her coworker Dani Soars.

The events had happened behind closed doors and not many details were available on that until a guest on Watch What Happens Live asked them to shed light on that night.

Alli, who identified herself as “pansexual,” told, “Look, I was just going with the flow. I’m a pretty open person and I enjoy life experiences.”

Alli also showcased her anger toward the viewers for the way they reacted with full of disgust and hate toward them.

“When Sydney and Gary hooked up, and [Dani] and J.L [Jean-Luc Cerza Lanaux] hooked up, it wasn’t such a topic. But then when you and I hooked up, that clip has been shown many times. We both, because of two girls. Like really horrible things,” Alli said.

Fast forward a month from that incident and it looks like Alli Dore is really happy with her new boyfriend Benny Thompson. In an Instagram Ask Me Anything session, Alli revealed that she and her boyfriend have been friends for 12 years. Therefore, when she went to Australia to hang out with her friends (which included Benny of course), she and Benny fell in love, all naturally.

In the same AMA session, Alli also said that they were moving into their new house together.

On 21st June 2021, Alli revealed she and her boyfriend, Benny were expecting their first child. Captioning a collage of baby photos on Instagram, she wrote— “So excited for this new adventure with you and our little ocean baby @bennithompson”

Alli and Benny’s son, their first child, was born prematurely. River George Thompson was born on August 26, 2021, at 5:17 am. In her baby announcement via Instagram, Alli sang praises about Benny. She shared— “I’m so grateful to have @bennithompson by my side because I couldn’t have done this without him. Proud of our little family and counting the days until River gets to come home.”