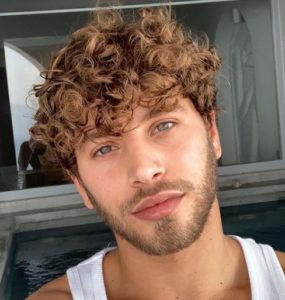 Every TV freak around the world has at least once heard of British dating reality, Love Island. The subject of this article, Eyal Booker, the talented British model, starred in the 4th season of the ITV2 show which aired in the year 2018.

Love Island star has created quite a buzz on the Internet in 2021 after he was seen to spend some quality time in Tulum, Mexico, soaking up the skin with his longtime girlfriend Delilah Hamlin on her 23rd birthday. Click here to have a look at some pictures.

Learn about him and his relationship with his girlfriend Delilah Hamlin over this Eyal Booker wiki. Also, read about Eyal’s age, job, and parents’ info.

Before we get on to talk about Eyal Booker and Delilah Hamlin’s relationship timeline, let’s talk about Delilah a little first.

Well, Delilah is a model and an Instagram sensation who first shot into the limelight as the daughter of The Real Housewives of Beverly Hills star Lisa Rinna and actor Harry Hamlin. She also has one sister, Amelia, an Instagram sensation too. Delilah made her TV debut in 2010 by appearing in Harry Loves Lisa.

Eyal and Delilah first met through Instagram. Talking to Closer Online, Eyal revealed that his now-girlfriend had a crush on him after she saw him on Love Island. Naturally, she slid into his DMs in early 2019, Eyal explained.

The pair totally hit it off on Instagram. Delilah even flew to London all over from California to meet Eyal. Sometime later, Eyal flew to California and the duo attended Coachella together in April 2019. Some weeks later, the adorable duo was then spotted kissing in Los Angeles according to People.

It was in June 2019 that the pair became Instagram official. Over the course of months, the duo appeared in each other’s Instagram posts and stories several times.

In July 2019, Eyal talked about his relationship with Delilah in an interview with Entertainment Tonight and went all praise for her.

In May 2020, the pair celebrated their first anniversary of togetherness. Both of them took to Instagram to celebrate their incredible achievement.

In February 2021, Eyal and Delilah had a steamy photoshoot session for Paper Magazine. The issue also included a Q and A session between the couple. 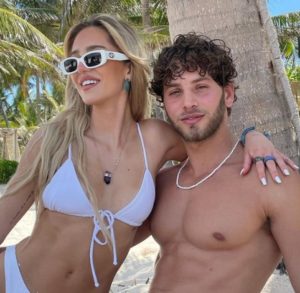 Eyal and his current girlfriend Delilah enjoying their time in Papa Playa Project Hotel and Resort, in Tulum, Mexico.

As of June 2021, Delilah had yet to become Eyal’s coupe as the couple was not married. What’s more, it did not look like the pair are in any kind of rush for the marriage.

Eyal’s sister’s name is Oriane. He was born and raised with her and other family members in London.

On February 23, 2020, Eyal and Oriane attended the “Onward” UK Premiere at The Curzon Mayfair in London, England.

Eyal Booker was born to an Israeli mother. Her name is Michal.

Eyal’s ethnicity is Jewish. Along with his parents and sister, Eyal has two brothers in his family. Their names are Tal and Ariel. Together with his brothers, Eyal had joined the kids modeling agency called Truly Scrumptious.

Eyal Booker stands tall at a height of 5 feet 10 inches and weighs no more than 65 kilograms. Furthermore, Eyal looks sporty with his waist measuring 30 inches and bust measuring 38 inches.

His distinctive physical features would be his curly brown hair and green eyes.

Eyal is a very popular person on the Internet. As of June 2021, he could be found on Instagram, Facebook, and TikTok.

As a kid, Eyal was a part of Truly Scrumptious, a modeling agency for kids. His experience at the modeling agency turned out to be instrumental when he later pursued modeling professionally.

As of June 2021, Eyal was signed by modeling agencies like W Model Management, Brick Models, Nev Models, and Full Circle Model Management. Thanks to these signings, Eyal got the chance to work with brands like Adidas and Bang+Strike.

He might be a former musician and a present-day talented model, but all the fame he is enjoying now is because of his association with Love Island.

Eyal Booker makes most of his money from brand endorsements and modeling shows. Plus, some of the total net worth — $900 thousand as of 2021 — also came from appearing in Love Island.

The British model joined the fourth season of the dating reality show Love Island in 2018. Though the British model did not have a great run in the show — dumped from the island on Day 25 — he received his fair share of limelight because of his looks.