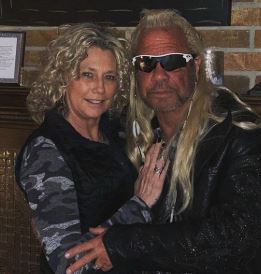 Out of nowhere, Francie Frane discovered fame in 2020. March that year, she became known as the latest girlfriend of Duane “Dog The Bounty Hunter” Chapman.

Read the wiki below and familiarize yourself with Francie’s age, job and family. Furthermore, get to know her background, former married life, and net worth.

Per 2021 reports from notable publications, Francie Frane was 52 years of age. However, her zodiac, birthday, and date of birth remained a private affair.

The same degree of anonymity extended to Francie’s upbringing and family details. Likewise, she kept her educational credentials under the wraps.

Regarding her career, Francie Frane held the job of a rancher. That said, her earnings and yearly income weren’t public information. Therefore, interested fans found it almost impossible to guess her net worth. Duane Chapman, on the other hand, owned $6 million in net fortune.

Judging by the images on the internet, Francie seemed fit for a woman in her 50s. What’s more, she stood beyond five feet and seven inches stature in height.

As of Spring 2020, Francie Frane’s social media presence is limited to Instagram alone. On the app, she had accumulated around 7.8k followers.

As fans can recall, Duane “Dog The Bounty Hunter” Chapman lost his wife Beth Chapman in June 2019. By then, Francie Frane was still mourning the loss of her husband Bob.

According to reports, she and Duane bonded over the shared loss of their life partners.

Before they began dating, Francie Frane and Duane “Dog The Bounty Hunter” Chapman were family friends. The pair first got introduced to one another after Francie’s now-late husband Bob hired Duane for some landscaping work.

Per The Sun, Duane was the first one to make the move. More importantly, his kids approved of Francie. Lyssa, Duane’s daughter, made their relationship public. Speaking about their romance, Lyssa revealed,

“They go to church three times a week and dad is trying to give up smoking — she is a good woman for my dad. He’s the happiest I’ve seen him in a long time — he’s so in love and wants to spend the rest of his life with Francie.”

Before dating Francie, Duane had a short-lived fling with Moon Angell. Interestingly, the Chapman family disliked the romance.

A longtime friend to the Chapmans, Moon was a bridesmaid at Duane and Beth’s wedding.

In early May 2020, Francie France became an engaged woman. She accepted the proposal from Duane “Dog The Bounty Hunter” Chapman.

Talking to The Sun, Francie confirmed the joyous news. She told the media outlet,

“I wasn’t expecting it at all. I think I had gone to pick up some food and then when I came back he had all the lights turned down with just a few lights on and a bunch of candles lit.”

“So when I came in I was like, ‘Wow, this is awesome.’ Then he said, ‘Come in, sit down because I need to talk to you. So I put all the food in the kitchen and I came in and he said, ‘I know that God brought you into my life and I don’t want to spend one moment of it without you.'”

“And he got down on one knee and he opened the ring box and he said, ‘Will you marry me and spend the rest of our lives together?’ Who can say no to that? It was wonderful.”

Meanwhile, Duane shared he wanted to have the biggest wedding.

“Francie and I are thrilled to be husband and wife. We appreciate all the prayers and well-wishes.”

Less than a month before the wedding, Duane’s daughters revealed they didn’t receive invitations to the ceremony. Bonnie Chapman, one of Duane’s daughters, cut her off for participating in Black Lives Matter protests.

“Bonnie’s allegations are false and a misguided attempt to derail our wedding. Despite the sadness, we feel at this rift in our family, Francie and I are looking forward to celebrating our wedding next week with the rest of our family and close friends.”

People might remember Dog the Bounty Hunter and his daughter Lyssa. Well, an interesting fact is that Lyssa...