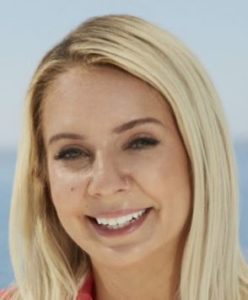 One can say that Sydney Zaruba was practically born on deck. Or at least the fact that she sailed for the first time at the age of 6 days is true. Sydney nonetheless grew up on deck and she has sailed all her life. And now, her life is actually bringing her fame and money, just her natural life, nothing more.

Get to know who Sydney Zaruba is, how she came to have the life she has and how her life as it naturally is brought her money and popularity.

Sydney Zaruba was born Julia Sydney Zaruba to her parents Captain John Zaruba III and Admiral Sarah Zaruba. And yes, both of her parents were ship-people and that was how Sydney was “practically born on deck”.

Sydney’s father, John, was actually from Jacksonville, Florida, and currently lives in Saint Augustine, Florida. He was a fifth-generation Floridian and had a very easy-going attitude. For his school education, he went to Andrew Jackson High School. We do not know much about her mother.

Her parents own a schooner called The Freedom and the company Schooner Freedom Charter. The Schooner Freedom is a passenger ship that could carry forty-one passengers and needed one master and at least two crew members.

Apart from her parents, Sydney also has a sibling in her family. That sibling is a younger brother named Jack, who is also a crew of The Freedom. Jack went to Cathedral Parish School and St. Joseph Academy for his school education. Later, for his college education, he went to Fort Lewis College. In fact, he was still in college.

Sydney Zaruba is a very tall woman, standing at a height of 5 ft 8 inches (i.e. 1.72 meters). And she weighed about 54 kgs. Her other distinct features include blonde hair and blue eyes.

As per the sources online, Sydney Zaruba has around $600 thousand net worth.

After Sydney started her sailor’s life at the age of 6 days aboard her parents’ boat Athena, she has continued to be on the decks. She was about 6/7 years of age when her parents bought the Schooner Freedom (2001). And according to The Freedom’s own website, Sydney has been “either below decks, doing homework, above decks, working the sails, or behind the scenes, working the office.”

The website also mentioned that Sydney was working as Schooner’s resident blogger and social media expert. Actually, Sydney’s education was also in a similar field. She was actually a Broadcasting and Communications major during college. She graduated from the University of Florida in 2017.

Apart from being aboard The Freedom, Sydney was also a world traveler as well as a yogi. Not only was she always looking for the next great adventure of her life, but she also helped other people find their adventure as a travel agent at Explorateur Travel and as a travel blogger at The Boho Traveller.

Apart from her parent’s Schooner, Sydney had worked for another yacht called Parsifal III. And because Parsifal III was part of the Bravo TV reality show called Below Deck Sailing Yacht, Sydney also appeared on the second season of the show. Sydney worked as a deckhand in Parsifal III.

Like any other reality show, Below Deck Sailing Yacht has its own drama. And for the short time that Sydney Zaruba has been a part of the show, she has been involved in one of the dramas of the show: the love triangle between Sydney and her co-stars Alli Dore and Gary King.

A little background first: Gary King is the first officer of the yacht and Alli was one of the stewardesses. During one of the episodes of the show, it was revealed that Gary and Sydney had hooked up, which they both admitted was just a one-night-stand.

Anyway, Gary and Alli eventually become girlfriend and boyfriend. And Sydney and Alli pretty much stopped talking after that. Sydney even blocked Alli on Instagram. As the new episodes of the show were appearing, there were new developments. Apparently, Alli halted her relationship with Gary after she found out about Gary and Sydney’s earlier hook-up. And Gary was seen already flirting with Sydney.

Having said that, the shooting of the show was over and everything that was happening in the show had already happened long before. And the latest real-life out-of-TV news was that Gary and Alli were moving in together.

And also that we knew nothing more about Sydney Zaruba’s boyfriends, past or present.