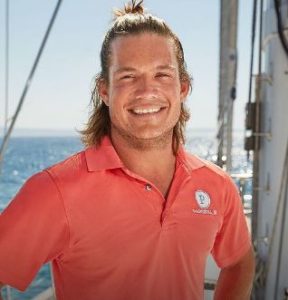 Gary King earned fame as a new cast of Bravo’s reality show Below Deck: Sailing Yacht in season two of the show. Along with a well-disciplined work ethic, Gary also demonstrated his weak side for beautiful women when he flirted and hooked up with two of his crew members.

Learn more about him with this Gary King Biography that covers details on his birthday, family details, and his experience working in Below Deck.

In July of 2020, Gary King turned age 32 years old. He receives warm birthday wishes from his family and friends on 13 July. Per that birth info, he owned Cancer as his zodiac sign.

Gary King was born to his anonymous father and his mother Sylvi Tiilikainen in his hometown of Knysna, Western Cape, South Africa. Later, his family moved to New Zealand based on the details of a source who contacted Reality Titbit.

His mother hailed from Stellebosch, Western Cape, and attended and graduated from the Cape Peninsula University of Technology. Whereas, almost no information surfaced on his father.

Moreover, Gary has a brother named Ryan King. He lives in Palma De Mallorca, Spain but attended and graduated from Knysna High School. He has been in a relationship with his girlfriend Kyla Strahl since June of 2012.

Both Gary and Ryan hold South African nationality and their family immigrated to New Zealand. He also speaks with a very strong South African accent.

Gary is on Facebook that houses a few details regarding him. However, he posted last time on the platform in March of 2021. Furthermore, the platform earned him 1290 followers.

Moreover, Gary is also on Instagram with 12.9k followers in total. Furthermore, his account is also verified and contains 136 posts in total as of this writing as of mid-June of 2021.

With medium-length hair and a that he enjoys rocking, make Gary look handsome with his square-shaped face.

His Below Deck Sailing Yacht Appearances

The South African national joined the Below Deck: Sailing Yacht for season two in early March 2021. He was accompanied by Captain Glenn Shephard and his deckhands Sydney Zaruba and Jean-Luc Cerza Lanaux.

The new cast of the show has over 12 years of expertise working in the yachting industry as a first mate. He set sail to Europe for the first time at the age of 18. Moreover, he also served as a captain of smaller boats. He tries best not to get distracted at work but, his crew has drama, and sometimes he finds himself embroiled in it.

He took the job of yachting as a simple job but ended up enjoying the journey so he has been working in the yacht ever since. Some of the places he has been to include Spain, Greece, Cuba, Italy, Norway, and of course New Zealand.

Gary King gathered a total net worth of $800 thousand from working on a yacht and small boats. With his job as a Chief Mate or First Mate, he pockets a salary of $100,000 to $150,000 a year for working on a superyacht. His responsibility as the second in command is loading and stowage of the ship’s cargo. He also stands at the watch, seagoing word for a shift, and is in charge of the ship’s operations.

While Gary King demonstrated diligence when it came to handling crews in Below Deck’s Parsifal III, however, he had no control over starting romantic entanglements. He was involved with two of his crew members: Syndey Zaruba and Alli Dore.

Gary King ignited romantic flares with Alli Dore at first. Then, he started getting flirty with Syndey Zaruba and even hooked up with her on the very first night off of the season. So, Alli thought it best for the two to pause their relationship for the remainder of the charter season.

Later in the 7 June 2021 episode, the crew jumped into the hot tub and Sydney got in the tub without any bra underneath. Surprisingly arrived Allie, where she found Gary with topless Sydney without Daisy by the side. This made Alli even more upset, the night ended dramatically.

Gary thought it was necessary to apologize to Allie and agreed to remain professional. But by the end of the episode, Gary and Alli appeared cozy and were even kissing each other. Though he demonstrated no remorse hanging out with topless Sydney, he did accept that what he did to Alli was wrong in all aspects.

He even went on Instagram to apologize to Alli and wrote that a person makes a mistake and learns from that. Alli also shared the awkwardness about being on the same boat, but working in the different departments, but running into each other often.

The relationship status between Gary and Alli remains obscure as of this writing. While interviewing with WWHL, Alli confirmed that she was simply “enjoying the flirt.”

Gary’s romantic quest outside of the TV show remains obscure as of 2021.