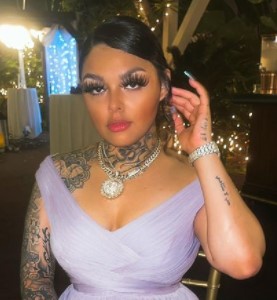 Almost everyone who is into rap music knows who Blueface is. The American rapper, whose real name is Jonathan Porter, became viral across the Internet for his offbeat style of rapping in his song “Respect My Crippin.” Furthermore, a remix of Blueface’s song “Thotiana” featuring YG and Cardi B peaked at number 8 on Billboard Hot 100.

If you have been following Blueface for some time, you might know that he was romantically linked to entrepreneur and Instagram star, Jaidyn Alexis. Their relationship was tumultuous from the start.

However, in Aug 2021, Blueface’s baby mama aka Jaidyn Alexis had uploaded a now-deleted video of herself kissing the rapper. Did that mean the two were still together or was something else is being cooked up behind the scene?

Find out everything about Blueface’s baby mama in this Jaidyn Alexis wiki. Also, learn about Jaidyn’s age, family, and net worth.

On Saturday, August 7, 2021, Jaidyn Alexis took to her Instagram to upload a video of herself kissing the rapper. Though Blueface’s baby mama had deleted the video shortly after, The Shade Room somehow managed to save it.

Since then, the clip has traveled all over the world and has made all of their fans and followers wonder if the rapper had things with Jaidyn sorted out after their fights in multiple instances.

One time in 2020, Jaidyn destroyed Blueface’s car and property in a jealousy-fueled rage. As per reports, Jaidyn did that after catching the rapper cheating on her with another woman. The other time, Jaidyn slapped Blueface after an argument broke out between the couple in an Instagram live.

However, what followed the now-deleted video was a contradictory tweet from the side of Blueface. He wrote, “The one I like da most ain’t tryna prove it to socials I appreciate da privacy,” which hinted that the rapper might have found a new girl altogether.

That being said, the relationship status of the high school sweethearts was still unclear as of August 2021. 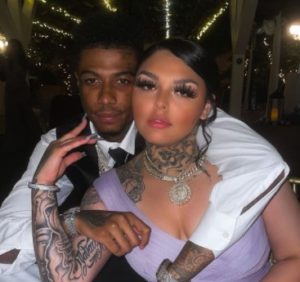 Blueface and his baby mama aka Jaidyn Alexis.

Though Jaidyn had not uploaded any pictures with Blueface lately, she kept posting pictures with her 4-years-old son, Javaughn J Porter.

Some speculations on the Internet suggest that the Blueface might be dating Chrisean Rock, a music artist the rapper began guiding.

Many people, however, thought that their relationship was not strictly professional. Some speculations suggested that Chrisean had two tattoos on her body, one on her face and another on her neck, dedicated to Blueface.

Blueface even addressed his fan’s speculations of him and Chrisean being a couple on an Instagram story. In a video, Blueface asked Chrisean if he was selling her a dream or making promises about getting into a romantic relationship, to which she laughed out loud. The rapper sternly told everyone that nothing was going on between them.

Despite all that, some of the rapper’s fans still believed that Blueface and Chrisean’s relationship was not strictly professional.

Could that start a feud between Chrisean and Blueface’s baby mama, Jaidyn Alexis? Well not anytime soon.

Jaidyn Alexis was 22 years of age in 2021 since she was born in the year 1998. Jaidyn’s birthday falls on the 2nd of October. Her zodiac sign is Libra.

Through a Twitter post, Jaidyn Alexis cleared out that her ethnicity is mixed. She has black, white, and Asian roots from her mom’s side and Mexican and Native American from her dad’s side.

As of 2021, we did not know much about Jaidyn Alexis’s parents. However, she did mention her parents in some of her past tweets.

One thing we can understand from her past tweets is that Jaidyn loves her mom with all her heart and respects her. One time she wrote, “happy mothers & fathers day to my momma bc she’s been the momma & dad all in one for me all my life, you rock mom. I love you.”

Another thing her past tweets tell us is that Jaidyn had a very cold relationship with her dad (or still has). One of her tweets was: ‘to be completely honest when I hear my mom talk about my dad. I cringe.’

Jaidyn Alexis stands at a rather short height of 5 feet 6 inches and weighs no more than 60 kilograms. She boasts amazing body measurements of 36-24-39 inches.

Her distinctive body features include a curvaceous body, brown hair and eyes, and tattoos all over her body.

Jaidyn Alexis has been a victim of plastic surgery rumors for a long time now. However, as of this writing, there was no evidence to support those rumors.

Reportedly, Jaidyn Alexis’s net worth is estimated to be around $400 thousand.

Jaidyn is an entrepreneur and an Instagram star by profession.