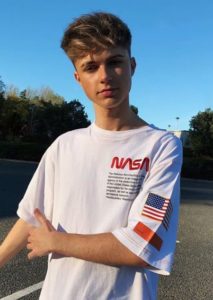 Middle-child syndrome may be an evident fact and is relevant to many, but to Harvey Cantwell, it is just a myth or folklore.

Harvey outshines everyone in his family and has the luster and talent, you can’t ignore.

Harvey Cantwell is a singer/actor best known for his song Personal (2018). The song had over 257 million views on YouTube by March 2020. Besides his singing career, he has appeared on the web series titled Chicken Girls (2017-2020)

Scroll through this wiki-style article as it unfolds details on the life of Harvey Cantwell as of March 2020.

Harvey Cantwell aka HRVY was born on 28 January 1999 in Kent, England. He turned 21 years old while celebrating his birthday in 2020.

Talking about Harvey’s parents: His mother Nicky Cantwell and his anonymous father had him as the second child out of 3. He is very close to his brothers Ollie Cantwell, the eldest, and Elliot Cantwell, the youngest.

Growing up, Harvey attended — and graduated from — Fawkham Church of England Primary School.

Harvey Cantwell showed early signs of talent to step into the entertainment industry. He was more into performing than anything else.

To set off his career, HRVY released his debut single Thank You (2013) on 8 February 2013. He was featured as a support artist for the girl group Little Mix in 2014 during their Salute Tour.

In 2017, Harvey signed to Virgin EMI records. In the same year, he released his debut EP titled Holiday. Following that, Harvey went on to release his second EP Talk To Ya which featured the hit single Personal.

He was also recognized for working alongside the acts like RoadTrip, The Vamps, Malu Trevejo, DJ Jonas Blue, South Korean boy band NCT Dream, and many more.

Besides music, Harvey is a TV presenter for BBS’s Friday Download on CBBC. He made a repetitive appearance from season 7 to season 9.

The I Don’t Think About You hitmaker pursued his acting since 2017. He made appearances in all of his videos. With a height of 5 feet 10 inches (1.77 meters) added with good looks and millions of fans, he owns the quality to star in feature films.

As of March 2020, Harvey (HRVY) is estimated to have accumulated a net worth of $1 million.

The singer is equally famous in TikTok. He has garnered 3.1 million followers as of March 2020.

Being a heartthrob for younger generations, Harvey Cantwell managed to keep a secret dating status.

Harvey occasionally posts pictures taken with different female friends on his Instagram handles. And all his followers flood the comment section with the question: Is she his girlfriend?

In 2016, Havey was rumored to be dating Sophia Mitchell. The alleged relationship ended after being together for 5 months. 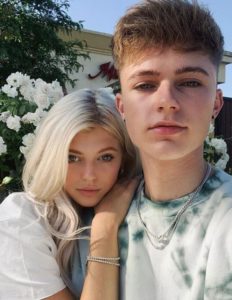 Harvey was rumored to be dating TikTok star and friend Loren Gray. The couple appeared together several times igniting the rumor among the fan following of both involved.

Surely, Harvey might see himself finding the one, getting engaged, and tying the knot.