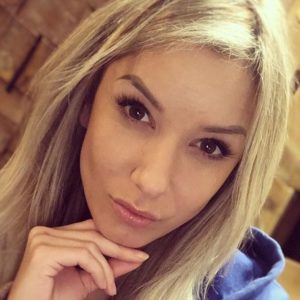 With an exciting new line up of contestants in search of their other half, Netflix reality dating show Love is Blind‘s first episode premiered on February 13, 2020.

The show’s most discussed contestant, Amber Pike after finding her love, Matt Barnett was busy discussing her finances. They got engaged in Mexico and returned to their apartment in Atlanta set up by the shows’ production team

Amber was in a financial crisis while Matt’s groundwork was all laid out. She was in about debt $20,000 from student loans and her credits were running out.

Admittedly, Amber was worried if Matt wouldn’t want to go through their wedding with the revelation. To her surprise, Matt stood his ground as he consoled Amber to weather the storm together.

Dig deeper into Amber’s life story as the article unfolds her wiki details such as net worth and plastic surgery!

Amber Pike was born on Apr 3, 1992, in Augusta, Georgia. Eddie Murphy and Alec Baldwin are her birthday buddies. She turned 27 years of age in Spring 2019.

She grew up with a sister named Rebecca Lynn in a Christian family. Even though Amber always dreamed of getting married before her sister, Rebecca outdid her by tying the knot in 2018.

After her high school education, Amber found her passion for living a luxurious and high-end lifestyle. She had an Instagram page @atypicalamber which amassed 502k followers as of early 2020.

Was Amber Pike In The Military? Net Worth, Debt, Job

Yes, Amber specialized as a tank mechanic while served at the Georgia Army National Guard.

The famed reality star was in the military before she slid into the limelight. Back in 2019, she proudly flaunted her outfit on her Instagram page. 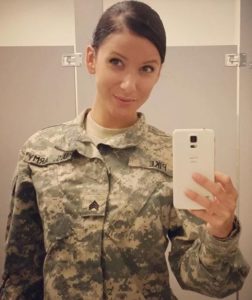 After her regretful decision to abort a pregnancy from a previous relationship, Amber left the military to gather herself up.

Running low on credits and debts to her name, Amber was looking for jobs before she stumbled upon the reality show.

Another tag to her wildness, Amber is also a winner of the Hooters bikini competition.

With her inclusion in “Love Is Blind,” Amber’s $200k net worth grew exponentially.

The TV series Love is Blind removed the aspect of physical appeal from the show by having the contestants date in a darkish pod.

Nonetheless, Amber Pike admitted having had plastic surgery. About her breast augmentation, she claimed “having work finished” and even offered up the name of her surgeon.

Admittedly, Amber was cautious not to influence her followers about cosmetics and surgery without proper research.

Amber preferred to workout and go out for a run to maintain her 63kg weight. She also seemed happy about her five feet & six inches plus height. Being a little shorter than Matt, it was just enough to hear his heartbeat on every hug.

The co-star on the show Love is Blind, Matt Barnett is an engineer and a native of Canton, Georgia. Before getting engaged to Amber Pike, Matt was raveled in a love triangle between Jessica and Amber.

In episode 6, Amber expressed her conviction “I can’t lose a love like this again.” Everyone could tell that she was deeply in love with Matt. 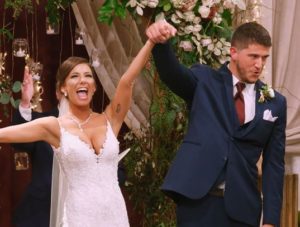 Amber Pike with her husband Matt Barnett at their wedding (Source: Netflix)

On the season’s finale filmed in Nov 2018, Amber and Matt exchanged vows and were legally married.

“There was one point where we almost broke because we had such expectations,” Amber confessed how hard it was for them to transition from bachelor’s life to a committed one.

Amber and husband Pike had their ups and downs. But as of 2020, they were still going strong and had no plan for kids as the duo were trying to figure things out for themselves.