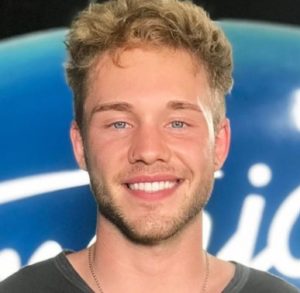 Say hello to one of the standout contestants on the 19th season of ABC‘s singing competition TV show American Idol, Hunter Metts. However, Season 19 was not the first season Hunter auditioned for; he had previously auditioned for the hit show twice.

As Hunter survived the “Oscar Nominated Songs round” on April 18, 2021, he has suddenly become one of the favorites to win the 19th edition of American Idol. Learn more about his American Idol journey in this Hunter Metts wiki. Also, get insights into his family, height, and girlfriend.

According to Hunter’s Metts’s profile up on ABC’s website, the American Idol contestant turned 22 years old in 2021.

On his 22nd birthday, Hunter’s sister even wished him by making a post on her Instagram handle. Uploading series of pictures clicked with him, she wrote, “HBD to baby brother!! my day 1 guy. Love you to the moon Hunter Metts!!,” in the caption.

Born in his hometown Nashville, Tennesse, Hunter Metts received immense love from his family members, that are his parents and his only sibling (a sister), growing up.

Hunter’s dad’s name is Jimmy Metts and his mom goes by the name of Janie Hinnant Metts. Janie, a graduate of the University of Texas at Arlington, has been married to Jimmy since October 24, 1992.

Hunter is really close to his sister, Mattie Metts, too. In fact, Hunter’s sister quit her job at Disney so that Hunter could audition for American Idol.

Hunter Metts measures tall at a height of 6 feet. Furthermore, the American Idol contestant weighed no more than 80 kilograms.

During the audition, Hunter had red hair and blue eyes, which seemed to attract many girls his age.

For a growing music artist and a new reality TV star, Hunter has more than a decent social media reach. As one would expect, Hunter was available on almost all social media platforms. However, he was most active on Instagram and Twitter.

Coming into the audition of American Idol Season 19, Hunter sang All The Pretty Girls by Kaleo which all the judges absolutely loved.

In the Hollywood week, Hunter sang Everything I Wanted by Billie Eilish for the judges. Furthermore, in the Showstopper Round, which aired on March 28 and 29, Hunter sang Noah Cyrus’s hit July.

For his Top 24 performance, Hunter sang Sia’s Chandelier in the solo round and Who Will Save Your Soul with his duet partner Jewel in the duet round.

In the Top 16 round, Hunter mesmerized everyone with his rendition of Bon Iver’s Skinny Love. In the Top 12 Live Reveal episode, Hunter sang Bonnie Raitt’s I Can’t Make You Love Me.

Moreover, in the “Oscar Nominated Songs round” Hunter sang Falling Slowly from the movie Once. Though Hunter had stumbled with the lyrics during the end of the song, the judges still gave him a standing ovation.

Fortunately, the Tennesse native made it through that round.

Though Hunter Metts’s exact net worth was not available on the Internet, a Software Developer roughly earns around $80 thousand a year which makes his net worth around $300 thousand.

Finally, he began his job as a Software Developer at Owen Technologies in July 2019.

However, Hunter quit his of a Software Coder after he was selected in the audition of American Idol Season 19.

Having already released his songs “The River” and “Loaded Gun”, Hunter came into the American Idol with hopes of launching his musical career.

Hunter Metts Girlfriend, Is He Gay?

In case you were wondering if the talented singer from Nashville Hunter Metts is single, the answer is no. Going through his Instagram profile, we can find out that he is not gay and has a girlfriend named Elli Helmintoller. Elli is a nursing student at Belmont University.

While it is not known since when Hunter and Elli are dating, they have been posting photos with each other as back as April 2017. 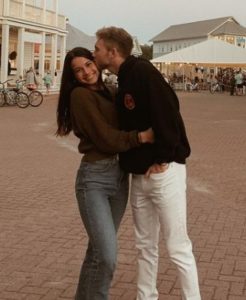 Hunter with his girlfriend Elli Helmintoller in 2020 (Source: Instagram)

Though Hunter’s Instagram is almost crowded with American Idol pictures, you can find some of his photos with his girlfriend Elli.

For instance, Hunter uploaded a picture of him kissing his girlfriend’s cheek on his Instagram handle on December 3, 2020. The post was captioned as “You’re my favorite(:”