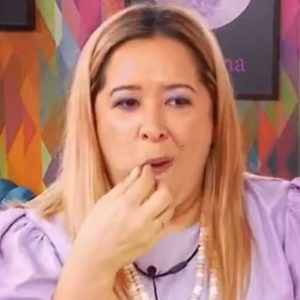 By its format, Netflix‘s reality competition series The Circle is a TV show where every contestant needs to fool each other. The one who fools the most people without getting recognized goes to win the show.

Lisa Delcampo, who came into the 3rd episode of The Circle Season 2 pretending to be “Lance Boss”, a former NSYNC member, did a pretty good job at fooling her fellow contestants.

Learn more about Lisa Delcampo wiki and get insights into her age, net worth, and husband.

According to Screenrant.com, Lisa Delcampo was 42 years of age in 2021. She celebrated her 42nd birthday on March 16, 2021. Going by her birthday, her zodiac sign should be Pisces.

Even though Lisa was born in Everett, Washington (hometown), she has spent the majority of her life in Los Angeles, California.

Lisa Delcampo grew up in a family of four which includes herself, her parents, and her only sibling. Her parents’ names are Luis Delcampo (father) and Marilyn Del Campo (mother).

Lisa’s sibling name is Lori Delcampo-Tipton. Lori is married to her husband Robert Tipton and has two kids with him. Moreover, Lori studied Fashion Merchandising and Design at Central Washington University whereas her husband studied Dietetics at California State University, Sacramento.

Lori celebrated her birthday on the 27th of March every year. Lisa uploaded a picture of young Lori to wish her a happy 40th birthday. She captioned the picture— “Happy 40th Birthday to @loridskippy -the best sister in the whole world!! Your heart, kindness, and loyalty are some of your best qualities… I hope I have been as great of a sister to you as you have been to me!”

Coming into Lisa Delcampo’s physical characteristics, The Circle cast member stood short at a height of 5 feet 2 inches. Lisa weighed no more than 57 kilograms as of this writing. Her distinctive body features would be blonde hair and brown eyes.

Lisa entered the 2nd season of The Circle with hopes of pulling off the biggest catfishing success ever. Talking to People, the reality TV star revealed that she had not planned to catfish as Lance Bass while applying for the show.

Moreover, Lisa went into the show as a catfish because she liked the idea of pretending to be someone. Why Lance, then? Well, for Lisa, he was only one of the few people she could properly catfish as since she worked as his personal assistant for 15 years.

When Lisa chose Lance to catfish as the former NSYNC member applauded her choice. “He was super supportive. He was like, ‘Do it. Whatever you need. I’ll help with whatever.’ He was really excited for me,” Lisa told People.

Lisa’s close relationship with Lance and her great interpersonal skills gives her an edge over other contestants. Chances are if Lisa plays the game carefully and mindfully, she might even win the whole game.

Lisa Delcampo’s net worth was reported to be around $750 thousand as of April 2021.

For education, Lisa went to Central Washington University in 1999. She graduated from there with a bachelor’s degree in Public Relations.

Upon graduation, she started working as a Senior Publicist at PR Plus. While working at PR Plus from January 2003 to September 2005, Lisa coordinated all local press for clients including Hard Rock Hotel & Casino, Restaurants at the Wynn, Talulah G, maintained filing system, screened telephone calls, scheduled meetings, drafted business correspondence, and much more.

For a TV star that is relatively new in the television world, Lisa actually has a decent social media reach. As of April 2021, she was available on Instagram and Facebook.

As of April 2021, there was no information about Lisa Delcampo’s relationship status. Given that Lisa was 42 years old in 2021 would make anyone guess she is a married one. But in Lisa’s case, her relationship status was not so easy to figure out.

That being said, it was unlikely for popular people like Lisa to have a husband or a boyfriend without getting anyone’s attention.