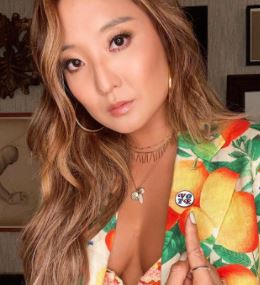 She shared that the show was “genuine and authentic” because of the “energy” present there. Similarly, experiencing just as Emily did, but in real-time, Ashley joked that show might as well be called “Ashley in Paris”.

Apart from this, Ashley’s character, Mindy wasn’t originally written to be an aspiring pop star. But after hearing Ashley’s voice, the writers had to make the best use of her potential and had her belt on camera.

However, Ashley did hesitate a little after she was asked to sing on the show. She loved the characters and the friendship and only agreed to sing if “would be story-driven and helpful to the characters”.

Stay till the end to learn more about Ashley Park.

Corresponding to her birthday, she is of Gemini zodiac.

As for her ethnicity, Ashley Park is Korean-American; born in Glendale, California, but raised in Ann Arbor, Michigan alongside her sibling, Audrey Park.

She was born as “Ashley Jini Park” to parents, Andrew and Sara Park. Reportedly, neither of her parents was in show-business; moreover, her father was “tone-deaf”. But they had “great showmanship” and signed her up for dance classes at the age of 3.

Also, Ashley was very dedicated and passionate about musicals. She even started taking piano lessons at 5 and started singing.

As a child, Ashley never thought that she would be able to pursue musical theater as a career. And It wasn’t until much later in high school she realized her talent.

Fun fact: Audrey never been to Korea before 2017.

Talking about her distinct features, Ashley has pitch dark eyes and small lips.

Reportedly, she had body measurements of 33-24-32 inches.

And the credit goes to her work as an actress. Ashley has worked in various popular movies and Tv shows since her Broadway debut in Mamma Mia 2014.

Broadway: The King And I, Sunday in the Park With George, and lastly, Mean Girls (for which she received Tony, Drama League, Drama Desk, Outer Critics, & Chita Rivera nominations for her role of Gretchen Wieners)

Also, Ashley was in the musical called KPOP before she dropped out to prepare for Mean Girls. She even won a Lucille Lortel Award for playing Mwe in KPOP.

Did u know: Ashley was cast for the starring role of Thoroughly Modern Millie set to premier in 2020. Unfortunately, the show was canceled due to the coronavirus pandemic.

In light of her education, Ashley graduated from a Musical Theatre program at The University of Michigan. Reportedly, she was battling with leukemia (cancer) at the time and ended up spending her entire sophomore year in the hospital.

From us – Chelsea Meissner Wiki: Husband, Net Worth, Job, Weight

Ashley Park, being in the limelight for over years, it was strange that no name popped up as her boyfriend before Oct 2020. However, fans have come up with some names that Ashley might have dated.

The first name on the list was the American actor and singer, Conrad Ricamora. He was also in the Broadway-like Ashley. Also, many were convinced that he was her husband.

Second, was another broadway actor, singer/songwriter, Zach Adkins. You might know him for broadways like Diana (2020), Anastasia (2017), and Kinky Boots (2014).

And the last was the American actor, singer, and dancer, Benjamin Tyler Cook. He was in the Mean Girls (2018) broadway alongside Ashley; we can guess why they were shipped together.

But as of 2020, Ashley Park had not revealed her boyfriend or husband, if she has one. She kept her dating history private and we guess that she might be single.

Before you leave – Katrina Milosevic Husband, Boyfriend, Height, Net Worth

With the release of Emily in Paris on the 2nd of October 2020 on Netflix, viewers shortly became hyped by...