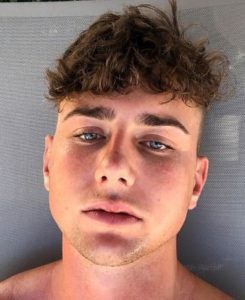 Harry Jowsey joined Netflix’s dating show Too Hot to Handle without knowing the rules he had to comply with. The show’s contestants weren’t allowed to kiss or have sex with each other. Furthermore, they were restricted from pleasuring themself as well.

As a man of indulgence, Harry was struggling with the show. Though supposedly, he was to be involved in forming an emotional connection, Harry was set on finding other ways for gratification.

Learn more about Harry Jowsey’s wiki as you tag along with the article.

According to his birthday, Harry is of Gemini zodiac.

Harry Jowsey was born and raised in Australia. However, he resided in Los Angeles during the filming of the show. As for his family, Harry had not disclosed information about his parents and siblings. Allegedly, Harry seemed closer to his mother between his parents.

Before Too Hot to Handle, Harry had appeared on the dating show Heartbreak Island in 2018. Securing the top place, he not only won $100,000 cash prize but also met his ex-girlfriend Georgia Bryers on the show. Harry dated Georgia for a while but the couple soon broke up.

Harry Jowsey Net Worth, Job, Too Hot to Handle

With a prize pool of $100,000 that would be reduced every time someone breaks the rule, Netflix’s Too Hot to Handle was one of the most anticipated dating show in 2020. Harry was the first contestant to reduce $3,000 from the pool as he kissed his show’s girlfriend Francesca Farago.

As for his jobs, Harry is a Youtuber and owned different fashion lines. His clothing line Naughty Possums had capitalized his phrases like “butter chickens” and, “boyfriend d*ck” from the show. Also, he was involved with the sunglasses brand called Knsngtn.

Harry Jowsey’s net worth was estimated to be around $350 thousand.

To mention his distinct features, Harry has ice blue eyes color and was obsessed with hairstyles. In 2016, his hair was shoulder-long and during 2018, he bleached it blond. As of 2020, his hair was back to its natural color and he maintained side quiff style.

Harry Jowsey is a tall man with a height of 6 foot 5 inches ( 195.58 cm) and weighs around 72 kg (158.73 lbs). Blessed with proper looks and height, Harry has also modeled in Tommy Hilfiger underwear.

Interestingly, Harry owned three tattoos — one inside of his lips and another on his butt, while the third was an Arabic phrase.

According to the data of June 2020, Harry’s Instagram’s bio had mentioned, “I was made in a test tube”. He seemed to post pictures of his ripped body and adorable dogs on his Instagram @harryjowsey with over 4 million followers.

Also, be amongst his 55.7K Twitter followers @HarryJowsey. And his Youtube channel @Harry Jowsey had almost 36.6K subscribers. He wasn’t much active on Youtube and his past videos were made of Q&A and vlogs.

We know how Harry Jowsey kissed his girlfriend Francesca Farago and penalized the prize pool. Moreover, fans were even madder when he tried to dodge the criticism by blaming the kiss on Francesca.

Even though Francesca called him a piece of sh*t, she admitted that she still had feelings for him. As Francesca wanted to discuss dating matter with Harry, she saw him in bed, talking with Rhonda Paul. Out of anger, she then went and made out with Haley Cureton.

Harry and Francesca started dating after the event. The latter even traveled to Australia so the pair could have their first date. While in Australia, they visited a wildlife sanctuary and went to movies.

By the time Valentine’s Day kicked around, Harry and Francesca had broken up. However, they would eventually reunite.

After reuniting, Harry met Francesa’s family. They immediately followed up by making their relationship IG official and getting matching tattoos.

Harry then surprised everyone by asking Francesca to marry him over a Zoom call in early-May 2020. However, the pair claimed they weren’t officially an engaged couple just yet.

Why Did He And Francesca Split?

In mid-June 2020, Francesca Farago announced her split from Harry Jowsey. Via a six-minute-long video, she broke the sad news. In cryptic language, Francesca blamed the breakup on Harry stating rumors about him were true and she could no longer fake a relationship.

For his part, Harry responded with a ten-minute video. In it, the handsome hunk insisted he was an open book and claimed he never lied to Francesca. As a couple, Harry shared they were always on the edge. Admittedly, he broke things off with Francesa for his mental health.

Published by A. Kat

Anime lovers and kind-hearted people are the best. View all posts by A. Kat