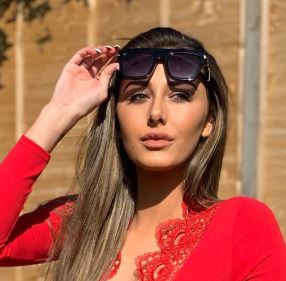 In mid-April 2020, Netflix’s latest offering “Too Hot to Handle” premiered. The reality dating show featured Chloe Veitch and 9 other single participants. Together, she and fellow contestants fought for a $100k grand prize. For them to win it all, they needed to avoid intimacy.

In 2021, Chloe appeared in another Netflix experiment show “The Circle”. A fan favorite for the season from the start, she finished in the runner-up position. Nonetheless, she built a connection during her stint on the show.

Follow along and take a slow walk through Chloe’s bio and wiki essentials. In doing so, read about her job, height, and parents. Additionally, get a scoop of her background and age.

In the Spring of 2021, Chloe Veitch became 21 years of age. According to her several tweets, she celebrated her birthday on 9th March. Moreover, the Netflix star owned Pisces for the Zodiac sign and therefore was sensitive and intuitive. Birdy is her nickname.

Chloe Veitch was born in the year 2000 to British parents. Born and raised in London, she maintained silence on the subject of siblings.

A peek at her Instagram depicted Chloe as a citizen of the world. Before even touching her 20s, she had visited countries like India, Italy, Korea, and Egypt. The “Too Hot to Handle” star’s parents probably funded the trips across the globe.

To talk about her educational credentials, Chloe attended a school to study law. However, many believed she dropped out for a career in show-biz.

As a high school student, Chloe earned a nod for an Essex Young People of the Year Award. By then, she had endured several tragedies — watch her step-brother die of alcoholism, witness her dad fight substance abuse and mourn the loss of her aunt.

Job, Net Worth, Too Hot to Handle

Chloe Veitch did it all — from singing to acting to modeling.

During her school years, Chloe acted in several plays. What’s more, she never hid her acting aspirations from the world. As of April 2020, a music video starring her accumulated 635k views on YouTube.

Not content with just acting, Chloe also aspired to become a singer. According to her Casting Now profile, she took private singing lessons.

Beyond the stated two arts, Chloe dabbled in modeling. As a runaway model, she walked ramps and even participated in a Top Model contest in 2018.

According to her FB page, Chloe held the job of an HR manager. What’s more, she took over the gig around 2018. In the meantime, she worked as the brand ambassador for “Protein World.”

From all her excursions, Chloe probably hoped to amass $1.5 million in net worth by the end of 2021.

According to several Netflix users, Chloe looked like several celebrities but couldn’t pinpoint who.

When “Too Hot to Handle” aired, Chloe Veitch’s social media reach saw an unprecedented surge. By May 2021, she had amassed around 1.6M followers on IG. While garnering 2.2K followers on Facebook, Chloe occasionally used Twitter.

Reportedly, the filming of “Too Hot to Handle” took place in 2020. Like all of the contestants on the show, Chloe Veitch — at the time — was available for dating.

An elated Chloe took to IG and shared about her involvement in “Too Hot to Handle.” In her words,

“The secret is out! I have been filming with Netflix, catch me on the new dating show on the 17th of April. I am so nervous and excited to be able to share something that I went through with you all. It was an emotional rollercoaster. You will see my highs and lows. But I hope you love it as much as I enjoyed filming it.”

Fans of Chloe took her excitement with a grain of salt. In part because the British beauty refrained from sharing if she found a boyfriend in the show.

During The Circle Season 2, Chloe Veitch formed an incredible connection with fellow contestant, Mitchell Eason. Mitchell and Chloe even kissed in the season finale. After the show, they remained in touch but refrained from immediately labeling their relationship. As of May 2021, they were great friends and indulged in casual flirting.

Bryce Hirschberg is predominantly known for completing on the first season of the hit Netflix show Too Hot To...