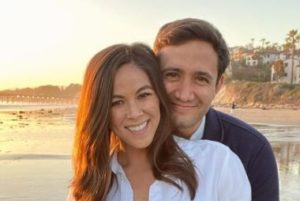 So, while congratulations are one the way for the couple, let us take a time out to learn all about the new mother over this Kimi Tobin Wiki.

She may be 5 years younger than her husband Gadi Schwartz, but they shared the same birth month, and zodiac i.e. Cancer.

Born and raised in Prescott, Arizona, Kimi Tobin is of mixed ethnicity. She has an Asian mother and a White father. Searching a little about them, we found that her mother went by the name @mama_san01 over IG, while her father remained anonymous.

Also, Kimi’s parents have appeared a few times over her socials. Especially on mother’s/father’s day, Kimi often let her followers know what they meant to her.

According to Kimi, she and her dad were “so similar” that he used to call her “mini-me”. As of 2021, he already retired from his job and was pursuing his “passions and love of vintage cars.”

Talking about her mother, she was Kimi’s “favorite gal in the whole world” — her “ying” to her “yang”, she says. Also, the two were shopping partners and traveling partners. The last we saw them was on their trip to Malibu.

Did you know: Kimi also shares her ethnicity with her brother named Sean Tobin. As of 2021, he was happily married to Emily and shared a son named Callan.

Kimi Tobin stands tall at a height above 5 feet 6 inches (167 cm). But she is a lot shorter than her husband Gadi.

Mentioning her distinct features, Kimi has dark eyes and hair, and a fuller smile.

Her FB bio then wrote, “Reporter for KNBC in Los Angeles. Send me your story ideas and any restaurant recommendations!”

Also, she was present on TikTok @kimitobin with 2.2K followers then.

Just in case you are curious, a TV news anchor’s salary in Los Angeles, CA was around $70 thousand per annum.

Before joining NBC4 in July 2018, Kimi worked as an anchor and reporter for KNXV in Phoenix and the NBC affiliate KOB-TV in Albuquerque, NM.

As for her first job, it was KTVZ in Bend, Oregon, that became the stepping stone for the anchor. She worked as a weekend anchor and reporter there.

Some of her memorable stories include — an L.A. deputy who provided CPR to a baby boy; and the time when she interviewed a nine-year-old girl who saved her father’s life by providing him a shot of insulin when he had a diabetic attack.

In light of her education, Kimi received her B.S. in Broadcast Journalism degree from the Arizona State University’s Walter Cronkite School of Journalism and Mass Communication in 2010.

When Kimi is not working, she likes to go shopping, travel outdoors, and scuba diving.

Trivia: Kimi is also a member of the Asian American Journalists Association.

For those of you who believe that long-distance relationships don’t work, Kimi Tobin and her husband Gadi Schwartz are the blazing examples that they do. The two went their separate ways because of their jobs back in 2014. But they persevered through the tough times and reunited in June 2018.

A year later, the lovebirds then got engaged in May 2019 and their wedding was held four months later at the Laguna Beach City Hall. In fact, they decided to throw the traditional wedding norms out the window and elope on an island. The ceremony was only attended by a few family and friends.

Originally, the duo planned their wedding overseas (probably Bora Bora) but then, they didn’t want to “hire a translator, have to go to their city hall via boat and have documents sent back.”

As of 2021, Kimi and Gadi only shared a kid named Kira Setsuko Schwartz (born on June 15, 2021). They previously announced their pregnancy in March that year.