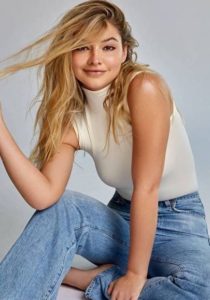 Netflix’s teen series Outer Bank became a new fan favorite after it’s premiere on 15 April 2020. The show’s lead Chase Stokes grabbed the attention of many. However, his co-star Madelyn Cline shared the spotlight and was much appreciated by many.

Madelyn portrayed the role of Sarah Cameron, who is attracted to John B., played by Chase. The on-screen chemistry of the two became the center of focus for many fans.

Welcome to the wiki-style article based on the life and career of Madelyn Cline, so delve into it starting with a short biography.

Madelyn Cline was born on 21 December 1997. She turned 22 years old while celebrating her birthday in 2019.

As for her zodiac sign, it is Sagittarius based on her date of birth.

Madelyn Cline was born to her parents: Mark Cline and Pam Cline.

Her father is Charleston Water System engineer by trade whereas her mother is a real estate agent. The family belongs to her hometown of Charleston, South Carolina.

As for Madelyn’s educational background, she attended Pinewood Preparatory School. Following that, she joined the Coastal Carolina University.

In addition to that, she flaunts her 34-26-36 inches measurements on her Instagram which helped gave her a desirable body.

In 2008, the Outer Bank actress showed signs of her passion for the entertainment industry when she asked her parents to take her to a casting call at the Millie Lewis Studio in North Charleston.

She was selected in the audition and was taken as an extra in 2008 Nailed which was filmed under Columbia Picture’s set. But in 2015, the movie was renamed, Accidental Love.

Her parents were supportive of her choice to pursue a career in acting. They even took her to New York while she was trying to land an acting gig.

In New York, she landed a few advertisements and modeling gigs. T-Mobile Verison, Toys-R-Us, Elidel pharmaceuticals, Parent & Child magazine were some of the notable works of her from the time.

Madelyn started her career as an actress by landing the role of Matilda in Milites Christi (2009).

As of April 2020, the exact numbers on Madelyn Cline’s actual net worth is yet to come out. That said, several reports estimated the sum to cross the $1 million thresholds.

With her acting and modeling career taking off, she gained burgeoning fans on her way up. As of the time when this article was penned, her Instagram account garnered 1.4 million followers on the platform. Likewise, her verified Twitter account has 42.3k followers.

Like most of her info on her private life, Madelyn Cline maintained the privacy regarding her dating status.

The reluctance Madelyn showed on delivering her relationship profile made it harder to spot who she was dating. None of her social media accounts hinted at her boyfriend prospects which suggested her preference to keep relationship facts locked away from public attention.

Respecting her privacy, some fans denounced all the surfacing dating rumors.

However, her on-screen romance with Chase Stokes was much appreciated by all the viewers of the show. The chemistry was undeniable between them and it was one of the centers of attractions.

To fans’ joy, reports claimed Chase and Madelyn were isolating together during the Coronavirus pandemic. Then came the dating rumors when Chase left flirty comments on Madelyn’s IG. While many commented the “Outer Banks” co-stars looked cute, few swore the duo were in a relationship IRL.