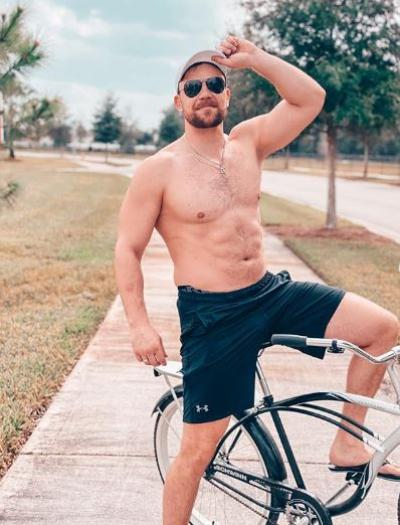 TLC‘s American dating reality TV show, 90 Day Fiancé saw many couples come and go after it first premiered in January of 2014. Since then, it launched many seasons and also several Spin-offs.

The fifth renewal of the 90 Day Fiancé featured a few couples including Andrei Castravet and Elizabeth Potthast, coming together from two different parts of the world.

Later in March of 2019, they reappeared in the fourth season of the spin-off show 90 Day Fiancé: Happily Ever After?.

In July of 2020, amid the Covid-19 pandemic, the makers launched the show’s fifth season. And, Elizabeth from Tampa, Florida, and Andrei from Chisinau, Moldova were one of the two returning couples.

Here, in the writing, we will unveil to you the exclusive details on Andrei and his wife, focusing more on Andrei’s wiki, family background, nationality, and more.

Also, because Andrei celebrates his birthday every year on the 11th of February, his zodiac sign is Aquarius.

Andrei Castravet comes from a family in Chisinau, Moldova. While he relocated to the States after meeting Elizabeth, his family stayed back in the homeland.

The 90 Day Fiancé episodes revealed that although Andrei was close to his parents, he had to stay a year and so, not seeing them. And although they visited him in the United States, the reason that they did not speak English, caused quite the hassle. Especially, when it came to easing the family drama between the in-laws.

Talking of Andrei’s origins, he held the Republic of Moldova’s nationality before coming to the States. He then applied for the K-1 visa, the kind available uniquely to foreign fiancés of American citizens. The updates on what became of it and his nationality after his marriage to Elizabeth were yet to follow.

Meanwhile, nothing at all was discovered if he shared any siblings.

Andrei Castravet, standing to a height of above 6 feet, weighed 83 kg at some point.

A brief look over his Instagram and his shirtless pictures, laying all over the gallery there, would reveal he is quite into fitness activities, like regular workouts and cycling.

On 23rd July 2020, Andrei’s wife shared a short video on her Instagram in an attempt to silence the comments on her appearance.

“To those who say I photoshop my pictures”— she captioned the video with the hashtags “sexy husband” and “nobody shaming”. In the video, Andrei and Elizabeth danced, merrily, showing their bodies from every angle, before kissing and snuggling. Andrei was seen shirtless in a bathing suit, while Elizabeth wore a sparkly bikini.

They seemed indeed proud of their appearances, nonchalant to the hate comments.

Andrei had 153 thousand followers on Instagram, as of 29th July 2020. Most of his posts on Instagram is either picture of his wife and daughter or updates on 90 Day Fiancé episodes

Additionally, he and Elizabeth owned a YouTube channel, Andrei & Elizabeth, with 4.08 thousand subscribers. In the channel, they worked collectively and made content based on the weekly updates on their life as a whole.

Before moving to Dublin, Ireland where he met Elizabeth, Andrei Castravet held the job of a detective in Moldova.

Also, he confirmed in the later episodes of the show that he left Moldova to make more money, working as a bouncer.

Be that as it may, the circumstances in the show did not portray Andrei much as an ambitious person. At some point, he even bragged to his Moldovan friends that there was no need for him to work because his wife was the breadwinner.

In the meantime, the latest episodes in the show presented him as still unemployed, wanting to be a stay-at-home dad. Only time will tell if Andrei Castravet would give a second thought on the matter and consider adding more bills to his existing net worth of around $100 thousand.

Andrei Castravet and Elizabeth Potthast, who appeared in an episode of Homeland in 2011, got married in 2017. Later, on the 23rd of January 2019, they welcomed their only child, a daughter named Eleanor Louise. 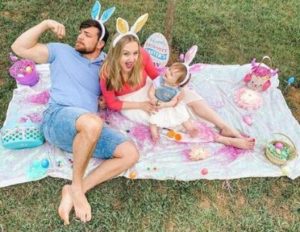 Andrei, his wife, and daughter quarantined together, amid the Coronavirus pandemic (PIC: Andrei’s IG)

Andrei and Elizabeth appeared to be head over heels for one another when they first appeared on 90 Day Fiancé.

However, the forthcoming episodes saw them in quite the turmoil surrounded by financial issues, Andrei’s inability in getting and keeping a job, and not to mention, Andrei’s conflicts with the in-laws.

But then also, the duo, in one way or another, did not feel like leaving apart or getting a divorce. They were insanely fond of their young one and not long ago mentioned their upcoming second wedding, in Moldova.