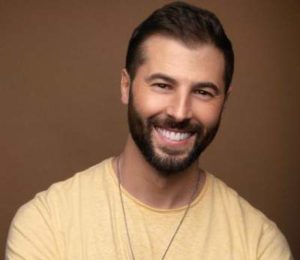 Testing their relationships on the third season of Temptation Island four couples—Thomas Gipson and Chelsea, Erin and Corey, Kristen and Julian, and Erica and Kendal— were known to the world via Fox and USA Network on Feb. 16, 2021.

Below is a wiki-writing that details everything there is to about Thomas Gipson.

37 years of age and in a relationship with a woman 8 years his junior, Thomas Gipson decided on getting candid on national television for the first time in life. At the time, he was yet to discuss his birthday details.

Thomas Gipson’s Facebook profile lists Sandee Cas and Suzanne Crystal as his sisters and Linda Monforte as his mother.

His mother, meanwhile, describes herself as a “golf girl” on her socials. At the time of writing, she was an adjunct professor at DeVry University – North Brunswick Campus. And with a degree in Psychology/Counseling, she used to be a guidance counselor at West New York Board of Education in the past.

Thomas, seemingly very fond of his family, credits his grandpa for always being a shining example to him of how to be a man. “thankyou for the countless stories and for all the advice along the way…It helped me become the man I am today”, were the words he dedicated to his Veteran grandpa in an Instagram-post.

Speaking of his education, Thomas studied Scene Study at Stella Adler Studio of Acting. There, he also did a Voice and Movement and Acting technique course. Not to miss the time, he studied acting at William Esper Studio.

Thomas Gipson, in his athletic and toned physique, stands 5’8″ tall in height and a lately reported weight of 69 kg or 151 lbs. His hair is brown and his eyes are hazel. He is almost always spotted with a big smile.

Thomas Gipson’s bio on Facebook introduces him as ‘an award-winning film actor and graduate of the William Esper Studio in NYC’.

Further, IMBD writes, Thomas trained under renowned acting coach Terry Knickerbocker. And, that he has the essence of a young Tom Cruise meets a stoic Hugh Jackman.

In 2015, Thomas landed a lead role in the multiple award-winning feature film By Any Means. Not long ago, he got to play the cocky lead Prosecutor ‘Brad’ in the courtroom drama The McHenry Trials.

Before Chelsea and Thomas decided to go on Temptation Island, they were together for a year. A mutual friend introduced them and so they started dating after Thomas slid into Chelsea’s DMs.

And thus far the companionship had been smooth sailing. Until of course, Thomas’s natural charm and flirtatious nature and Chelsea’s jealousy and possessiveness started to cause a problem, anytime they were in a social situation.

And, Thomas’s history of being commitment-phobic in the past didn’t help either with Chelsea’s insecurities. Chelsea, apparently, is his first serious relationship.

With all of this in mind, they basically agreed to live with a group of singles of the opposite sex, to test the strength of their relationship. Being on the reality TV program, with tempting/ sexy singles, Thomas wishes to put Chelsea’s fears of infidelity to rest. This way, when they are together in the future, he wants her to learn to accept him for the social, outgoing person he is, “rather than expecting him to dim his light.”

Are Thomas Gipson And Chelsea Orcutt Still Together?

All we could tell for sure is, Thomas Gipson continued to dwell in West Hollywood, California. And, the fan-query, if Chelsea Orcutt and Thomas Gipson are still dating, remained a mystery at the moment.

That been said, still, there were some floating hints on social media which indicated their romance did survive the test on Temptation Island.

Just as the way Distractify put it, their friends were genuinely shocked to learn about Thomas and Chelsea being on it. They were like, “WHAAAAT?! Y’all were on a TV SHOW!?” and “I can’t believe it. I can’t wait to watch you guys!”

So far the survival rate for any relationship on the show has been very low. Out of the eight couples last two seasons, only two of them managed to go home intact. And therefore their romance would really mean something special to the viewers if Chelsea and Thomas returned home from the island undivided.