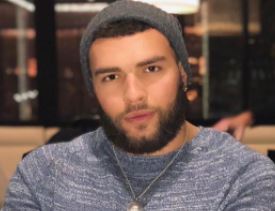 Season 3 of Temptation Island is here, and featured amongst one of the four couples is the fitness trainer Julian Allen and his long-term girlfriend, Kristen Ramos.

Though it might not be the best place to test their love, Julian and Kristen shared that wanted to “make sure” that they trusted each other “wholeheartedly”. But just at the start of the season, Julian’s faith in Kristen was already quavering and it didn’t look like they were going to make it.

So, as the season slowly unfolds the drama that awaits Julian, let us take a time out to learn all about his personal life through this wiki.

Corresponding to his birthday, Julian is of Gemini zodiac.

Julian Allen comes from a family of five. He was born to parents, Tracy and Rob Allen, and has two younger siblings Jordyn and Jaden.

Talking more about his family, it seems that everyone was a football fan there. His father, Rob Allen worked at “sales and marketing”, and rarely missed the football games. As for his brother Jaden, he was a footballer who played the position of the tight end (TE) for Fordham Football.

However, the girls seemed less interested than the boys. His sister, Jordyn Allen is a Montclair State University graduate and only appeared on games to support her brothers.

Trivia: Julian has cousins named Andre and Anthony Dirrell, who both are professional boxers.

In light of his education, Julian attended Washington Township High School. Then, he went on to graduate from The University of Southern Mississippi in 2017.

As of his hometown, Julian hails from Scranton, PA.  Before 2021, he was living in  Sewell, New Jersey with Kristen.

His most distinct feature would certainly be his chiseled bulky stature. Apart from that, Julian’s tattoos and his beard are easily noticeable too.

Julian Allen is a professional football player and a personal trainer.

Talking about his career as a footballer, Julian played high school football at Washington Township HS (but was a non-qualifier in the class of 2013). Later, he went on to play for Lackawanna College from 2013 – 2014, Redshirt Junior in 2015, and Division 1 collegiate football at Southern Miss Golden Eagles later. Also, he made it to the opening day roster for the Dallas Renegades of the XFL.

As for his job as a fitness trainer, Julian worked at the company “NJ Performance Lab” which he founded with a co-footballer, Nick Grosso. Both the co-owners were SSA certified and CPR/AED certified fitness trainers.

According to Julian, his passion for fitness comes from his background as a football player. He wrote,

“Since competing at the professional level in the NFL/XFL, I’ve developed a desire to help others reach their personal fitness goals.”

Yes, Julian Allen and Kristen Ramos were still together in early 2021.

But it didn’t seem like the duo was going last long. Though Julian was ready to put a ring on Kristen, he was scared of the fact that she still didn’t fully trust him. Because of that, he felt disarrayed and even said to Lauren,

“Because I love her, I would have to let her go.”

Moreover, in a few of the clips, Julian was seen getting comfy with other women and even spotted going down on one knee and putting a ring on a woman (who definitely was not Kristen).

Julian and Kristen’s highschool are sweethearts. The two started dating since they both were 15 and celebrated their anniversary on July 26. Even before they entered Temptation Island the duo’s road to 11 years of togetherness was full of challenges. Reportedly, Julian even cheated on Kristen twice before, but she loved him enough to forgive him.

According to Kristen, she doesn’t want to just get married just because they’ve been together for 11 years. She shared,

“I want to make sure that, you know, we trust each other wholeheartedly and that it’s the right choice for both us. Right now it’s just try and see, you know, if this challenge can make or break us.”