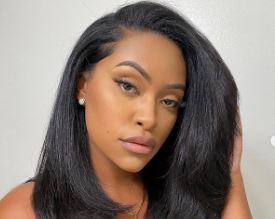 Fighting to hold on to her love, Erica Washington was struggling to convince her boyfriend Kendal Kirkland on Temptation Island season 3.

Though her reason to be in the show was to get engaged and live a happily-ever-after life, her boyfriend joined the series to explore any possibilities out there. He wanted to confirm if Erica was the best he got or was there someone who could live up to his high standards!

So, while the two struggled to find a common ground, only time remained evident what was to become of them. Meanwhile, as we wait for the outcome, let us delve into Erica’s personal life over this wiki.

Erica Washington was 24 years of age when she first appeared on Temptation Island in 2021. She is two years younger than Kendal, who celebrates his birthday on September 15 and is of the Virgo zodiac.

Erica Washington didn’t share much about her family. All we know is that she has a sister named Cienna Washington who once appeared on her Instagram. Over the picture, the two siblings wore matching white tees and looked no less beautiful than the other. The caption wrote,

As for her ethnicity, Erica appears to be Blasian (Black and Asian).

In 2021, Erica was living in Los Angeles, CA with her boyfriend Kendal. Her hometown was still unknown then.

As of February 2021, Erica entertained 10.1K followers over Instagram. Her posts were filled with pictures flaunting her voluptuous body in bikinis and tight suits.

Erica Washington stands tall at a height of under 5 feet 6 inches. She is much shorter than her boyfriend Kendal who is 6 feet 4 inches (193 cm) tall.

As for her weight, Erica last announced herself to be 65 kg (145lbs) on IG. She then wrote,

“I need some calorically dense meal ideas — could use some variety in my life.”

It seems that Erica was a fitness enthusiast. We could see her working out and often being conscious about her health over her social media.

Talking about her tattoos, Erica has inscribed over 6 vertical words on the right side over the waist.

Erica Washington worked as a personal assistant, while Kendal was a successful business owner and a fitness influencer. And this was also the reason why Kendal was having second thoughts about Erica.

Kenda’s bio over the USA network wrote he wanted a partner who could keep up with him “personally and professionally”. So, Kendal might have felt a little discontent with Erica’s job.

Just in case you are curious, a personal assistant’s salary in San Diego, CA area was around $30 thousand per annum.

As for Kendal, he was full of aspirations. He was the founder of Lifestyle Credit Repair, involved himself with Fit Seven, and even released a nutrition book called “The Kirkland Approach” with a partner. Also, at the same time, he was working his way to becoming an actor and a model.

Information on her education was unavailable.

Erica Washington and Kendal Kirkland were dating for over two and half years when they first appeared on Temptation Island season 3.

Just within a few episodes, the show depicted Erica as a confident lover who hoped to get engaged to her boyfriend, while Kendal had concerns if she fit into his future. Because of that, Erica felt underappreciated, meanwhile still hoping that things would get better over time.

As for Kendal, the show was a perfect opportunity to test the waters and determine if Erica was really the one.

We believe that Kendal Kirkland and Erica Washington aren’t together.

It was in December 2020, when Erica first hinted to her fans about her breakup. She took it to her Instagram to share two single pictures captioned,

“Revoking people’s access to me is my favorite flex.”

Moreover, just a few days before that, Kendal also posted a cryptic picture over his IG marking his location as “At Peace, and the caption wrote,

“Sometimes you have to let the rain come to see if the foundation is weak.”

As season 3 of Temptation Island was filmed back in the fall of 2020, the photo could have been posted shortly after he returned from Hawaii.

Overall, we are not 100% sure that the two were separated. As of Feb 2021, the duo still followed each other over IG and they did share a few comment exchanges over it.