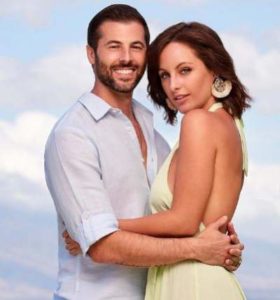 Meet Chelsea Orcutt, who stars in the third season of Temptation Island alongside her beau Thomas Gipson.

Originally, the season was delayed because of the Covid-19 pandemic. And so, it finally premiered on the Fox and USA Network on Feb. 16, 2021.

Below is a wiki-writing of Chelsea Orcutt, with the potential of causing your required dose of drama on the Hawaiian island of Maui.

29 years of age and in a relationship with a man 8 years her senior, Chelsea Orcutt planned to get candid on national television for the first time in life. At the time, she was yet to discuss her birthday details.

Chelsea Orcutt comes from her hometown of New Jersey. At the time of writing, she lived in West Hollywood, California, probably away from her family.

Because she is new to the television world and media and public invading her privacy, likely everything concerning her early and family life was under the carpet.

Speaking of her education, she has a BBA from the Widener University.
She was there from 2009 until 2013. Later in 2019, Chelsea went for a 1 year Drama and Comedy program in Acting at Annie Grindlay Studio.

Also, a cat lady, Chelsea had a separate Instagram account for her cats Benjamin and Buddy. She also lovingly called them her babies.

Chelsea Orcutt, per her LinkedIn profile, is a bicoastal commercial, film, and television actor. She is a self-employed actor and brand ambassador at SAG-AFTRA. The professional networking site described her as a singer-songwriter in the indie pop-rock band Like Crazy.

For four years until 2016, she worked as a brand representative at PUSH Agency.

This way, her net worth up until early-2021 was reported nearly as $200 thousand.

Just like her co-stars on the show— Erin and Corey, Kristen and Julian, and Erica and Kendal— Chelsea and Thomas said yes to the social experiment on Temptation Island. Basically, they agreed to live with a group of singles of the opposite sex, to test the strength of their relationship.

Before Chelsea and Thomas decided to go on the show, they were together for a year. A mutual friend introduced them and so they started dating after Thomas slid into Chelsea’s DMs.

And thus far the companionship had been smooth sailing. Until of course, Thomas’s natural charm and flirtatious nature and Chelsea’s jealousy and possessiveness started to cause a problem, anytime they were in a social situation.

And, Thomas’s history of being commitment-phobic in the past didn’t help either with Chelsea’s insecurities. Chelsea, apparently, is his first serious relationship.

So, being on the reality TV program, with tempting/ sexy singles, Thomas wishes to put Chelsea’s fears of infidelity to rest. This way, when they are together in the future, he wants her to learn to accept him for the social, outgoing person he is, “rather than expecting him to dim his light.”

Are Chelsea Orcutt And Thomas Gipson Still Together?

Clearly, the fan-query, if Chelsea Orcutt and Thomas Gipson are still dating, remained a mystery at the moment. Seemingly the couples participating in the stint are obliged to keep their relationship status a secret. And, Mark Walberg and his team had started taping the season at the end of September in 2020.

That been said, still, there were some floating hints on social media which indicated their romance did survive the test on Temptation Island.

Just as the way Distractify put it, their friends were genuinely shocked to learn about them being on it. They were like, “WHAAAAT?! Y’all were on a TV SHOW!?” and “I can’t believe it. I can’t wait to watch you guys!”

So far the survival rate for any relationship on the show has been very low. Out of the eight couples last two seasons, only two of them managed to go home intact. And therefore it would really mean something to the viewers if Chelsea and Thomas also returned from the island undivided.