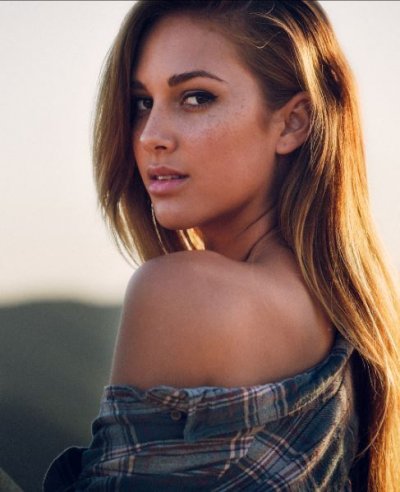 Tatiana Dieteman is a model who landed fame representing Lions Model Management in Los Angeles, California. She was drawn to further media attention for her relationship with the famous American actor and producer, Tobey Maguire.

Tobey is best known for playing ‘Spider-Man’ in the three smash-hit films of the same name by director Sam Raimi.

The movies released amid 2001 are forebearer to the current trend in movies and TV shows based on superhero comic book characters.

Meanwhile, in the writing below, find out how Tatiana Dieteman fell in love with The Great Gatsby actor.

Tatiana Dieteman, age 27 in 2019, grew up celebrating her birthday every year on the 25th of June. Consequently, her zodiac sign is Cancer.

Tatiana Dieteman comes from a family in the United States. Although nothing beyond is heard of her parents and siblings.

Tatiana Dieteman stands at a height of 5 feet and 8 inches (1.73 meters). At some point, her measurements were reported as — the bust size of 32 inches, a waist size of 24 inches, and hips of 33 inches. She wore dress sized zero, shoes sized 7.5.

More so, some of her notable features would be her brown hair and eyes of the same color.

Until mid-May 2020, Tatiana Dieteman seemed a low-key personality. She accumulated a small number of followers on her Instagram where she had been active since April 2017.

Though, she was nowhere to be found on other social media platforms such as Facebook and Twitter.

For some reason, the extent to Tatiana Dieteman’s professional life also was not discovered at the time.

Circa March 2015 she worked with the agency, Next Models Los Angeles.

And now, years later, her job and the net worth she hoarded from showbiz, were alien to the public and media.

On 24th March 2020, US Weekly wrote about Tatiana Dieteman and her star boyfriend Tobey Maguire being in a good place after more than a year of dating.

Also, a source claimed Us Weekly that the couple lived together and were happy. According to them, even Tobey’s family approved of his 17 years younger bae.

Tobey and Tatiana were first linked in August 2018, the time when they attended a bash at Tobey’s friend Leonardo DiCaprio’s house.

Since then, the pair kept away from the media and public until most recently on 13th March 2020. They were found holding hands as they left the vegan restaurant, Crossroads Kitchen, in Los Angeles.

Tatiana Dieteman, seen together with Tobey Maguire and his kids during Cabo San Lucas vacay in December 2019 (Pic: dailymail.co.uk)

Before this, in December 2019, the duo was spotted vacationing in Cabo San Lucas. As said by Just Jared, the trip was also accompanied by Tobey’s kids from his previous marriage.

Tobey Maguire Bio — From Net Worth To Married Life

In the earlier days, Tobey, like his father, wanted to become a professional chef. But then, in the sixth grade, when he asked his mother to pay his bills for Home Economics class, she instead enrolled him in Drama. And, thus happened acting.

The actress, Elizabeth Debicki is the upcoming 2020 sensation we all have been waiting for. And taking her to...