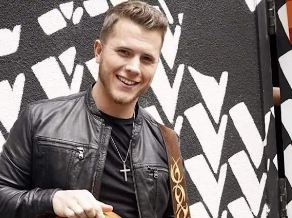 Gyth Rigdon became an international phenomenon after competing in the 2019 edition of “The Voice.” During his tenure on the show, the gifted singer sang for judge Blake Shelton’s team.

Want to know Gyth on a personal level? well, read into his bio plus wiki!

Believe it or not, Gyth Rigdon isn’t a moniker —  it’s his real name. In terms of height, the immensely talented crooner stands little above five feet & eleven inches.

Raised by a single father Paul Rigdon, Gyth had quite an unconventional upbringing. By the look of things, his biological mother was never a part of his formative years.

Regarding siblings, Gyth has brothers. The Rigdon brothers grew up in their family’s animal farm which housed around 27 horses.

Getting into his educational background: Gyth reportedly earned his high school diploma from a small South Louisana school.

Gyth was 3 years old when he first commenced singing. By 7, he was already performing in churches and local talent shows.

At age 15, Gyth began to take music seriously. A Country music fanatic, he was 17 when he performed for the very first time at a biker bar.

Songs, Albums Plus Net Worth

Performing scintillating songs during “The Voice” run, Gyth Rigdon won hearts and adoration from the music listeners across the globe.

Before showcasing his vocal chops in “The Voice,” Gyth had released two albums: “Where I Began” and “When I’m Gone.”

The exposure from the association with “The Voice” should assist Gyth stack more millions to his $1.5 million net worth.

In his Facebook “About” section, Gyth cited his father, brothers, Chris Stapleton, Darius Rucker, George Strait, and Chris Cagle as his musical influences.

Many might not know but Gyth first auditioned for “The Voice” in 2014. Reflecting on the rejection and the eventual comeback, he once revealed:

“I was actually told no, which was a blessing in disguise. I was not ready… was not polished yet, and then fast forward, a few years later, I actually get a phone call saying, ‘Gyth, we want you to come back and audition again… “

Talking about social media reach, Gyth had amassed 44.1k IG followers (as of May 2020). Meanwhile, he collected 130k likes on Facebook.

Upon Gyth Rigdon’s debut on “The Voice,” detractors were quick to assume his sexuality as gay. If only they looked into the crooner’s married life with his gorgeous wife. 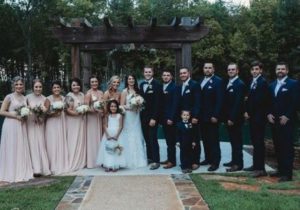 On 7th October 2018, Gyth married his then-longtime girlfriend Bayleigh Gandy. The duo’s friends and family looked on as they exchanged wedding vows.

On the day of the wedding, Gyth donned a navy blue tux. Bayleigh, meanwhile, looked gorgeous rocking a sleeveless dress.

A year into their lives as husband and wife, Gyth and Bayleigh announced that they were expecting a baby. Per the statement, the duo’s baby was all set to arrive in May 2020.

Back in February 2019, Bayleigh had hinted that she and Gyth were planning to have kids via an Instagram post.

As predicted, Gyth and Bayleigh welcomed their first bundle of joy on 13th May 2020. They named their child Ivy Ray who was born at Lake Charles Memorial Hospital for Women. What’s more, baby Ivy Ray arrived at 1:39 pm weighing six pounds 12 ounces.