Broadcast meteorologist, Jordan Wilkerson grew up always interested in weather, tornadoes, and water spouts. Since an early age, she has nurtured this very concern as a passion.

She used to be the “weather girl” for her middle and high school’s morning announcement shows. Even today, Jordan is equally resolute and excited to continue her job of “informing and entertaining” people.

Now, get to know her in detail, personally as well as professionally.

Jordan Wilkerson grew up rejoicing her birthdays every year on 20th October. Therefore, her zodiac sign is Libra. Also, Jordan was reportedly born in 1992— making her 28 years of age in October 2020.

On her IG bio, Jordan shared she is a Libertarian.

At some point before 2010, Jordan Wilkerson’s father passed away. And because the family shared a great relationship, Jordan said that losing him “took a toll”.

Not long after the episode, Jordan came to the Pacific Northwest from Florida to live with her then-boyfriend (now husband); he was a Navy, assigned to Naval Base Kitsap.

Jordan had mixed feelings about moving away from home. But at the time, this was the only way she knew to endeavor her journalism career.

Besides, not much is known of her parents and siblings, in case she is not an only child.

Jordan Wilkerson obtained a bachelor’s degree in Communications from the University of Washington— Tacoma in 2014. Following graduation, she worked as a reporter and weather anchor at KEPR-TV in the Tri-Cities.

Last heard in August 2018, she was working on a bachelor of science degree in Meteorology from Mississippi State University. She told at the time—

“I have about a year left and then I’ll go from weather anchor to meteorologist. I’m taking two to three classes at a time right now online and it’s been challenging to balance school with a full-time job.”

In November 2017, she joined the weather team on Seattle’s KING 5. There, she covered KING 5 mornings every Monday through Friday, consistently as a meteorologist, feature reporter, and traffic anchor.

In the meantime, the salary numbers Jordan Wilkerson earned were estimated to be $75 thousand. And the net worth she hoarded as of 2020 was $550 thousand.

In March 2021, Jordan revealed she was leaving KING 5. In a lengthy IG post, she and her husband, Robert — who was retiring —  were relocating to Flordia.

After leaving KING 5, Jordan Wilkerson landed a new job at the  Jacksonville NBC affiliate, WTLV/WJXX. While at WTLV/WJXX, Jordan was co-hosting First Coast Living. March 22 marked her debut on the network.

Until March 2021, Jordan Wilkerson had more than 6.9k followers on her Instagram. Also, the Florida native enjoyed a good number of fans on her Twitter and Facebook, as well. Plus, in her self-titled YouTube channel where she was yet to share videos, she already had more than 400 subscribers. As per her social media bio, she currently made her home in Washington, the United States.

Boasting 5 feet 7 inches in stature, Jordan Wilkerson stands at a very good-looking height. And at some point, her weight and body measurements were calibrated as 57 kg ( pounds) and 34-26-33 inches, respectively.

Reportedly, Jordan Wilkerson got married to her husband, Robert in October 2017, after many years of knowing each other.

A day before their wedding, Jordan couldn’t contain her excitement as she shared a photo of them enjoying rehearsal dinner at their favorite Waffle House.

Jordan is not a big fan of discussing her private matters in public. She maintains a healthy balance between her professional life and life away from the camera.

However, now and then, she shared with her people, in social media, the moments from her occasional outing with her hubby. 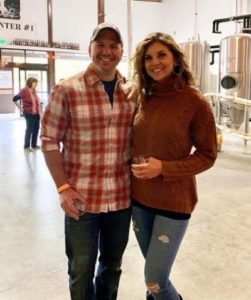 As of the time of writing this piece, she and Robert shared no children. Although, they called themselves the parents of their two rescue terriers.

According to Marathi.tv, Jordan’s husband Robert worked in the navy. The publication also noted the married couple lived in Seattle.

Jordan is an avid animal lover, and this is often obvious in her weather shows and social media activities.