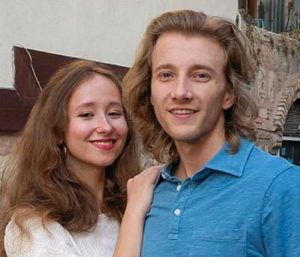 This Steven Johnston Bio includes Steven and Alina’s story and separately Steven’s family, height, and age-related details. Now, in the writing below, we mean to talk about one half of the new couple Steven and Alina.

Steven Johnston from Salt Lake City, Utah, met Alina from Russia a year before appearing on 90 Day Fiance: The Other Way. The inter-country couple met and bonded through a language app; Steven was learning Russian and Alina was learning English.

Steven is planning to give up his life in America to be with Alina, a 5 year younger and beautiful Russian woman he met online. So, the premise of their story on the show is such that.

The first time Steven met her in person, he felt a strong connection with her. He shared that he and Alina had always been interested in each other. Alina was initially reluctant about meeting him because she was “wary” of his religious beliefs. And of course, she thought he would sell her organs.

Steven decided to get Alina’s parents involved to make Alina feel more comfortable. And also because in Russia a Mormon like him is seen as a member of a cult. The first meeting between the two was in the presence of their respective mothers.

The relationship survived the initial worries and suspicion of falling for a stranger from another country. And Alina, aged 20 and a virgin and scared about the Mormon faith, even planned to convert to Mormonism for Steven.

With time, their bond grew stronger with time. Later, they decided to get married within a year of knowing one another. And in between, they introduced one another to gems from their countries, places, cuisines, and more.

Now, on the TLC show, you may see, when the Russian border closes because of the coronavirus pandemic, Steven and Alina will come up with a backup plan to meet up and marry in Turkey instead.

Then, as it always happens with the 90 Days couple, when the pair is past the honeymoon phase of their relationship, they will realize their love also comes with its own cost.

Secrets of Steven’s past and Alina’s suspicions of infidelity start to threaten their future together, leading Alina to question if she truly knows the man she is about to marry.

Speaking of if her not this youngest couple and the latest additions to the cast on the reality series is still together — Alina liked and commented on a photo of Steven, shared on his Instagram on 25 May 2021. She entered several heart eyes and fire emoticons the picture that showed him staring away from a certain rooftop place on the seaside.

Still, it was hard to tell if they made it through the show together (as we write this late in August 2021).

Steven Johnston reached 25 years of age when he starred in the TLC show 90 Day Fiance.

Steven kept his family and his relationship with each one in the family so well sealed from his social media people. Hene, his parents, and his siblings remain a mystery to many.

Steven Johnston is a devout Mormon from Salt Lake City, Utah. Mormons, so you know, are a religious group that bides by concepts of Christianity as well as prophecies made by their founder, Joseph Smith. They primarily belong to “The Church of Jesus Christ of Latter-Day Saints; headquartered in Salt Lake City, Utah. They have grown to become more than 16 million members worldwide. Steven, therefore, claims faith to be a crucial part of his life.

He has three flags of Russia, Turkey and America symboled on his Instagram hinting he commutes between the 3 countries.

Talking about height, Steven Johnston stands above 6 feet or 1.82 meters.

Steven Johnston had 590 followers on his private Instagram @stevenjj1994 as of late august 2021. As his IG bio stated, he is a climber, gamer, and believer in a brighter tomorrow.

At the time, one could not find Steven in other places including Facebook and Twitter. Or, he goes by a different name and kept it private.

Steven Johnston accumulated $100K net worth as of August 2021.

While it’s not quite understood what kind of job Steven had or if he had any. We came to know that he was an avid gamer. He reportedly holds a degree in Master’s of Public Administration from the Pennsylvania State University.

For what reason, Steven stayed in Eastern Europe and learned to speak Russian, may the 90 Day Fiance will make us understand.