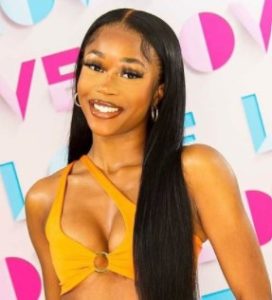 July officially got to be declared as the “month of drama” as fans witnessed the producers of Love Island bring back the Casa Amor twist on Season 7 of Love Island UK, after witnessing its implementation in yesterday’s July 26th episode of Love Island USA.

Things were about to spice up and loads of dramas wait ahead as the 12 new Islanders were set to storm the villa and turn some heads beginning from Monday, July 26th episode of ITV reality TV hit.

Twelve new islanders were announced on the 25th and 26th of July 2021 — and Salma Naram was one of the incoming islanders who would not mind stepping on a few toes if needs be.

Before Salma creates any drama in the original villa, let’s learn a thing or two about her. From her Love Island stint to job and boyfriend–this Salma Naran wiki has everything.

With the decision of Love Island UK‘s producers to go for its iconic Casa Amor twist in the ongoing 7th season of the hit ITV show, the model/influencer joined the dating show as one of the 12 newcomers. The other 11 islanders (6 male and 6 female) who joined the show in its 4th week are Amy Day, Clarisse Juliette, Dale Mehmet, Harry Young, Jack Barlow, Kaila Troy, Lillie Haynes, Mary Bedford, Matthew MacNabb, Medhy Malanda, and Sam Jackson.

Talking about why she signed up for Love Island, Salma had this to say: ‘I’ve never been in love. What better place to have a tunnel vision and really finding your one? It’s a perfect atmosphere, you don’t have the outside world distractions. It looks like time moves fast in there in a good way – it’s like, do you actually like me or not? In the real world, it’s so wishy-washy. With this, it’s just, you need to know.’

Salma also said that she does not like confrontation and if confronted, she could turn into a fiery woman. She added, “I don’t bother people if they don’t bother me.”

Salma Naran was 20 years of age in July 2021. She celebrates her birthday on the 30th of May every year. Her zodiac sign is Gemini.

Born and raised in Dublin, Ireland, Salma Naran’s nationality is definitely Irish and her ethnicity is Black.

Not much information was available about her family as of July 2021. However, one time, she did make a TikTok about mom and step-dad.

Based on her Instagram pictures, Salma Naran stands at a height no less than 5 feet 5 inches and a weight not lesser than 50 kilograms. Dark-haired girl boasts amazing body measurements of 36-24-38 inches.

Salma is a model and social media influencer by profession. She is represented by the talent agency named Onyx Agency. She has been associated with Onyx Agency since at least September 2020.

Onyx Agency even came in support of Salma for her Love Island stint. They made an Instagram post announcing Salma as the new entrant in the 7th season of Love Island.

As a model, Salma collaborates with various fashion brands and does endorsements for them. In her February 7 Instagram post, Salma revealed that she was a partner of Fashion Nova, a truly global fashion partner.

Salma Naran’s net worth was estimated to be around $150 thousand as of July 2021.

The fact that Salma Naran has entered a dating reality show says it all. She was obviously single as of July 2021 and had no boyfriend. Moreover, the model has already revealed that she has never been in love.

Salma entered the ITV reality show in hopes of finding her love. If everything goes right and she learns to play the game the right way, she might find a man for herself.