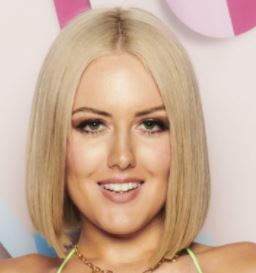 After Love Island USA, the original UK edition was also set to introduce the (in)famous CASA Amor. 12 new contestants, including the subject of this article, Kaila Troy, are entering the show in its 5th week to shake things up a little.

In this series of articles, we will bring to you each of the new additions to Love Island. And today, we have for you Kaila Troy, an “international DJ from Dublin”. Read everything you need to know about her in this Kaila Troy wiki below. Find out her birthday and the details of her plastic surgery.

Kaila Troy entered the Casa Amor villa of Love Island on the 29th day of the show. Along with Kaile, 11 other additions entered the show on the same day.

So who is Kaila Troy? Well, let us introduce her with her friends’ words. During an interview, Kaila had this to say, “My friends would say I’m very energetic. Never got into drinking, was never my thing, but I’d be the one up all night still and they’d be falling asleep.”

Regarding her addition to Love Island, Kaila said, “I think my party trick is I’m the DJ and kind of the life of the party. I create the party.” Basically, she wanted to bring life to the Island.

As of 25 July 2021, Kaila Troy was 28 years of age. And she celebrated her birthday every year on 5 January. #CapriconWomen and #Capricon were her favorite hashtags for her birthday posts on Instagram. Needless to say, her zodiac sign was Capricorn.

Kaila’s hometown is Dublin. She was born and raised in Malahide Dublin to parents Gary Troy and Susan O’Gorman-Troy.

We do not know much about Kaila’s father. We knew a little about her mother Susan from her Instagram. Susan described herself in her IG bio as “Carpenter, Dancer, Dance Teacher, Designer, DIY mechanic, fitness crazy And Chicago born living in Ireland.”

Growing up, Kaila also had a younger sister called Katherine, who was only a year younger than Kaila. Katherine’s birthday is on the 23rd of April.

The entire Troy family is a very tight-knit family. Katherine once, while wishing him a happy birthday, called her father “the hardest working man in all the land.” She also called her mother “the greatest”.

Kaila Troy is a woman of average height and she stood at 5 ft 7 inches (1.70 inches). Also, Kaila is a voluptuous woman with quite impressive measurements. She has a figure of 36-26-37 inches.

Once it was announced that she was joining the cast of Love Island, fans had started to speculate if Kaila Troy had had plastic surgery of any kind. Of course, Kaila had an amazing figure and people were curious to know if there was any surgery behind that figure.

Unfortunately, there was absolutely no information regarding Kaila’s plastic surgery. It was most likely that she did not have any.

Kaila had some considerable following on Instagram, not so much on any other social media platforms. On her Instagram account @djkailatroy, she had 45.8k followers as of 26th July 2021. She had decent popularity, i.e. 8k likes and 8.2k follows, on her Facebook page @djkailatroy as well. She also had a regular Facebook account.

According to some sources, Kaila Troy boasts a sweet net worth of around $300 thousand.

Kaila is a professional DJ or “Worldwide International DJ”, according to her own website. Kaile has DJed in over 20 countries around the world including India, South Korea, etc. Also according to her website, “Kaila can read any crowd. Her Knowledge of music sets her apart. She understands all cultures.”

Kaila started her career as a DJ in 2013 when one of her friends pushed her to the stage and told her to DJ in the middle of the Trey Song Concert. Since then Kaila has become a very successful DJ but she still has a goal to “create the best musical experience for everyone around the world.”

You can find Kaila’s videos on her Youtube channel DjKailaTroy, which has 381 subscribers. Kaila also made her own music, which you can find on SoundCloud or her own website kailatroy.com.

According to her Linkedin, Kaila is also the CEO of Troy Collection, her own clothing line. She also has other merchandise like beauty products, calendars, posters, etc.

Another source of Kaila’s earnings was her OnlyFans account. She found out about the platform through her friends and she made an account when the pandemic hit. And after only two days, she had earned $300. Apparently, Kaila did not make pornographic content, which is what OnlyFans was most famous for, but posted the things she would have posted on Instagram, only the posts were monetized.

We do not know anything about Kaila Troy’s past or present boyfriends. It was most likely that she was single. In fact, Kaila had mentioned that one of the reasons behind her joining Love Island was her lack of success in the romantic sphere. Her exact words were, “Real-life dating has not been doing me any favors at all. I’ve had it.”

Well, let us hope Kaila gets what she desires from Love Island.