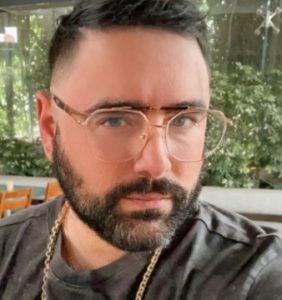 Most of the people who know Joey Camasta know him as the best friend of Jersey Shore star Nicole “Snooki” Polizzi. However, the celebrity makeup artist has built his own identity.

As a foodie/beauty guru, we will see how much Joey Camasta’s net worth is. We will also talk about his age, Instagram handles, and partner over this Joey Camasta Wikipedia!

In 2021, MTV gave green light to a show named Messyness, the spin-off of MTV‘s Ridiculousness. Like Ridiculousness, Messyness is a show which will indulge in showing some of the most debaucherous viral clips from all around the world.

If you follow Jersey Shore’s Nicole “Snooki” Polizzi in her socials, then you are aware by now that she will be hosting the show Messyness. However, many people are still confused if Nicole’s bestie Joey Camasta would also be a part of the show.

Unfortunately, Joey will not be joining the show Messyness. However, as it turns out, the social media influencer will be helping with Nicole’s makeup and hair behind the scenes.

Reportedly, Joey had applied to be the part of the “couch Crew” in Messyness. But, he was not cast since the directors felt his and Nicole’s closeness would make them lose focus while filming. Later, it was revealed that reality TV star Tori Spelling, former Olympian Adam Rippon, and comedian Teddy Ray would compose the “couch crew.”

Actually, Nicole had announced about joining the show Messyness in May 2021 on It’s Happening, a podcast series run by Nicole and Joey. As for what viewers can expect from the MTV show, Joey told that once you tune into Messyness, you are in for all the viral sexual Tiktok videos. Joey also told that viewers “will see everything from nights gone wrong to cheaters caught totally red-handed to awkward proposals, and much more.”

Messyness is set to premiere on MTV with a one-week special event beginning on August 23, 2021.

Joey Camasta was born in the year 1979 in the United States and thus turned 42 years of age in 2021. He celebrates his birthday on the 3rd of January every year. Joey’s zodiac sign is Capricorn.

About his family, Joey Camasta was born to his parents, Joseph Camasta (dad) and Susan Camasta (mom). Unfortunately, Joey lost his mom Susan on June 29, 2014.

About Joey’s dad, Joseph studied at The Culinary Institute of America and currently works as a chef at Beacon Hill Club.

Joey was born and raised in his hometown in Union Township. He currently lives in New York.

Joey Camasta stands tall at a towering height of 6 feet 1 inch whereas his bestie Nicole “Snooki” Polizzi stands at a rather short height of 4 feet 8 inches.

Joey is a multi-talented person as he describes himself as a “foodie, beauty guru, comedy kween, and a celebrity makeup artist. He offers invaluable things to the online world through his passion and love for makeup, food, and comedy.

As a makeup artist, Joey has already worked with some of the most popular celebrities in the industry, including his best friend Nicole. He discovered his talent in makeup when he started working for MAC Cosmetics in 1997.

Joey also runs a podcast It’s Happening with his bestie, Nicole “Snooki” Polizzi, where the two talk about everything from the latest trends to celebrity gossips.

Furthermore, Heavy also reports that Joey also made an appearance in Season 2 of Jersey Shore: Family Vacation. He has already appeared in shows like Two Dimes and Chopped.

Joey earns most of his income through his merchandise and sales of virtual tickets to the podcast, It’s Happening.

Joey Camasta is a publicly gay personality. His dating life, however, is not so “public” as it turns out. There is little to no information available about his partner.

As of 2021, the makeup artist has written “single” under the Relationship section of Facebook.

However, Joey keeps posting jokes about his personal life and partner in his socials. Almost 8 years before, Joey joked about MLB star Mike Trout being his partner.

Once, Joey also posted a picture of him with his bestie’s husband Jionni LaValle and captioned it: ‘Me and my date @jlavelle ready for 2013.’