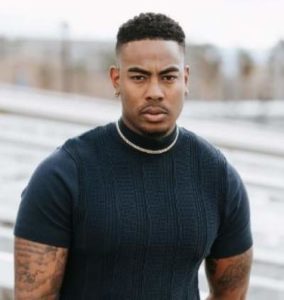 Things were about to get heated over at the Love Island USA villa early in Aug. 2021, as two men Andre Brunelli and K-Ci Maultsby joined the cast of sexy singles.

And while the viewers have been wondering ‘who exactly are these new guys’ here’s writing detailing all about one of the two.

Soon after the Casa Amor twist wrapped up, three girls Alana Paolucci, Bailey Marshall, and Elly Steffen, were sent to cause some trouble and tempt away contestants like Korey Gandy from their love interests.

While K-Ci Maultsby and the other guy were brought in to make things even more gripping.

Based on a sneak peek first published by Entertainment Tonight shows, things are about to go from “messy to messier” in the villa. And K-Ci too despite his recent entry seemed to be playing an important part in it.

The trailer showed K-Ci sharing a passionate kiss with Trina Njoroge, thereby causing new doubt on Cashay Proudfoot‘s future on Love Island USA. Because, to us, the teaser seemed to suggest, Cashay and Korey Gandy might end up in the same boat.

Basically, Elly Steffen, Olivia Kaiser, Trina, and Cashay were most likely to fall for K-Ci and his new-coming fellow Andre.

These being the only single girls on Love Island, at the time, there was no dearth of options for K-Ci.

In the meantime, some of the fans had been especially rooting for him to mend Trina’s, broken heart.

As a Virgo born on September 17th, K-Ci Maultsby is supposedly characterized by his sensitive, artistic, and reserved nature. And because he was born in the year 1993, K-Ci reached the age of 27 in 2020.

When K-Ci started his Twitter account in 2012 he had worded— “half black half Filipino. just trying to make it. collegebound basketball player. class of 2012” — as its bio quote.

So, one can tell he acquired a half Filipino and half Black ethnicity from his folks.

Also, we know, his hometown is in Atlanta, Georgia, and currently (by Aug. 2021), he called Jose, California his home.

Judging from a rare picture of K-Ci Maultsby’s mother and brother posted online, his mother is a Filipino. Thus, his father is likely a Black man.

For siblings, K-Ci seemed to have only a brother, Kelvin Secondez Maultsby, who was in fact running K-Ci’s Instagram when he was away on Love Island.

Born on Sep. 3, 1989, Kelvin turned 32 in 2020. Just like K-Ci, the older brother went to Central Gwinnett High School. While on his Facebook, he mentioned he is from Zama, Kanagawa.

Then, K-Ci also his cousin, Angelo Secondez Castrillo, as his family member on Facebook’s ‘family and relationships. Angelo is a private security guard at SM Megamall.

Physically strong, with big muscles and an athletic physique, K-Ci Maultsby stood 6′ 2″ in height when he played basketball, positioned guard, with the Polk Eagle team. His jersey number was 21.

Not to miss, he signed with the Florida Flight Basketball contract early on Jan. 27, 2017.

However, he chose not to be on TikTok until that time.

K-Ci Maultsby is a barber from the San Francisco Bay Area. Before the world knew about his Love Island stint, he had less than an estimated $200K net worth.

According to indeed.com, the average salary of someone like K-Ci, working as a barber in Los Angeles, California, was $30.40 per hour, before Aug. 2021.

A barber with a notable knack for traveling, K-Ci appeared to be spending his time between Los Angeles and the San Francisco Bay Area.

Then, of course, K-Ci also earns his living working as a certified personal trainer at Superior Gains.

About his education, all we know is he attended Central Gwinnett High School.

By now, everyone is aware of the fact that Love Island introduced K-Ci Maultsby as a single guy looking for his match amongst the participants on the island in Nīnole, Hawaii.

So, it was established his relationship status was single and he had no girlfriend just before his reality TV journey.

K-Ci has also been very careful to not reveal his former dating life stories. And no surprise, even his social media sharings would not give anything away except that he is a fitness and healthy lifestyle enthusiast. And that, he loved to hit the gym.