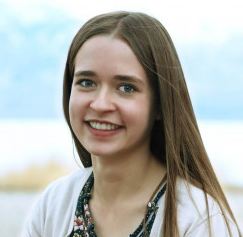 TikTok star Nicole Parish [@soundoftheforest] is dedicated to sharing awareness about Autism to her followers on her social media. She is also an art lover of insects and her TikTok content is mostly Autism, Art, and Bugs.

Delve into this article where we cover other details on Nicole’s life with this TikTok: Nicole Parish [@soundoftheforest] Wiki.

On 29 May 2021, Nicole Parish [@soundoftheforest] claimed she was of age 24. She never went into further details about her birthday. Hence, we don’t hold any information on her birthday and her zodiac sign.

Nicole made a list of people to have at the party and what they loved eating and handed it over to her mother. She had fun at the “surprise birthday party” it was a surprise party for everyone but her who the party was meant for.

Nicole Parish [@soundoftheforest] was born to her anonymous father and her mother Amber W Parish in Provo, Utah, United States. Her parents are featured on her socials multiple times but no precise information has been shared on her folks.

More about her family, Nicole has two siblings: her brother Davin Parish and her older sister Megan Parish. Growing up, she and her brother wanted to have a dog as a pet, but their father’s allergy to dogs didn’t allow them to have one as a pet.

So, they started collecting insects as a hobby, which became a major subject for her art. Davin lent helped raise and take care of the insects for their sister, Megan.

Talking about Nicole’s sister, Megan is married and became Megan Mills. She and her husband also welcomed a baby into their lives. Nicole and most of her family now reside in Spanish Fork, Utah.

Nicole Parish [@soundoftheforest] stands tall not more than 5 feet 6 inches (1.67 meters). She weighed about 51 kilograms (112 lbs). One of her distinct features is that she puts on headphones most of her time. In one of her TikTok, she explained autistic people are sensitive to sound which is a common trait. In her case, it was like there was no filter on the world.

So, without a headphone, there would be a lot of information for her brain to process and stimulate, overstimulation could lead to melting down or a shutdown.

Nicole Parish [@soundoftheforest] has been trained in classic still life art, but the institute which she attended is a mystery yet to be resolved. On 29 May 2021, A TikTok user asked her whether she was in high school or college?

She replied that she was in neither of them. In fact, she graduated from an art apprenticeship with Casey Childs for three years.

But, Nicole also studies entomology on the side for fun. The video earned 1.5 million views which is one of the highest on the platform.

Nicole Parish [@soundoftheforest] is an artist by profession. She was fascinated by art and insects from an early age. So, she decided to bring the two of her interests together. Her subject stemmed from a personal passion which is bugs.

Growing up, Nicole found them interesting and she was drawn to them because of their physical beauty and their movements. She is a collector of insects and stays mindful of how she grows her collection and making sure she does so humanely. The collection includes both dead and live insects.

Nicole honors and captures their essence, giving them new life in her rich, colorful oil paintings. She has always loved oil paint because the pigments and colors are so vibrant. Two of the artists that influenced her work include John Singer and John William Waterhouse and several other nineteenth-century artists.

Not only insects, but Nicole also does equally impressive portraiture. Based on Lark and Key, her arts could cost an average of $850 per piece. With over two-thirds of her art collection already sold at the Meyer Gallery in Park City, Nicole is pressed to keep up with the demand of her new clientele.

However, it was her career as a social media influencer that gained her the most attention. Her TikTok (@soundoftheforest) earned 593.5k followers as of July 2021. Her videos earned her 24.4 million likes which is very impressive. She covers several topics in her videos from art to living with autism, misconceptions about autism, and her personal life.

Nicole is also the recipient of the Gospel Vision of the Arts Scholarship, Peer Choice Award.

According to Lessons.com, Nicole also teaches art classes and was doing that for over 10 years. Her students must be in the age group of 5 to an adult. She charges $80 a month for group classes which are an hour and a half once a week.

Nicole Parish [@soundoftheforest] discussed her sexuality on 24 July 2021 on her TikTok. She found it astounding why people wanted to know about her sexual interests while she was discussing moths and over-stimulation.

But Nicole didn’t reveal her sexuality as she believed the type of content she created never affected whether she was bi-sexual, straight, or lesbian. She also welcomed any members from the LGBTQ+ community on her page. She finds it weird that the users were asking her that question.

However, on 15 February 2021, Nicole talked about going on three dates with a guy. They were at a restaurant and he turned at her and asked if they were dating? She thought everything was great between the two until she shared it with her roommate.

The roommate announced them girlfriends and boyfriend and later explained to her what the question actually meant. So she broke up with him as he became her accidental boyfriend.

Nicole shared another dating story on 1 March 2021. She and a guy were discussing a told story about the light spectrum relationship with superman’s suit when he was going at the speed of sound. The boy was a little confused at that point, so he tried changing the subject to a social situation which he believed the two would have in common.

But, Nicole had no idea what he was talking about, eventually towards the end and he asked her are you a human? She replied after a long pause: Yes. We are the same species. He was less convinced after that.

But, as of July 2021, her relationship status remains obscure.