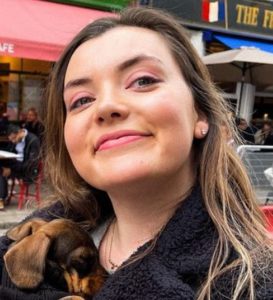 Before viewers will get to see a fair share of laughter Lorraine and her daughter Rosie have while reacting to the TV shows, we bring to you a detailed article about Rosie. Learn about her age, job, and boyfriend in this Rosei Smith wiki.

With the introduction of Rosie in the cast members of Season 3 of Celebrity Gogglebox 2021, she finally became one of the youngest cast members of the popular Channel 4 show.

While Rosie did not tease anything about her appearance before the show’s premiere, her mom however did make an Instagram post. She wrote: ‘SO looking forward to this – @rosiekellysmith and I had such a laugh and @rubyisasausage was so well behaved. Hope you can watch it on Friday.”

On her 21st birthday, Rosie uploaded a picture of a big cake alongside the caption “Demolished #21”.

Rosie’s mother Lorraine, which we all know is a TV veteran, is married to her husband of long-time Steven Smith.

While we all know Rosie’s mom is popular for having presented ITV shows like Good Morning Britain, GMTV, The Morning, and Daybreak, Rosie’s father is a TV cameraman.

Lorraine first met Steven when he was a cameraman on TV-am. The first time she saw him, Lorraine felt he was “the one.” Then, the adorable pair, in no time, married in September 1992. Rosie’s parents even celebrated their 28th wedding anniversary on September 5, 2020.

Rosie is a single child from her parents and therefore has no siblings.

Since Rosie Smith is still unpopular in comparison to her mom, some details about her (height in this case) are still unavailable. However, going through her Instagram pictures, she stands, at least, at a height of 5 feet 6 inches.

Furthermore, she weighs no more than 55 kilograms. Her distinctive physical features would be her brown shiny hair and hazel blue eyes.

As of June 2021, Rosie could be found on Instagram and Twitter. No, she was not available on Facebook. She had a decent social media reach on those two platforms.

Rosie Smith took her first job as a TV Production Work Experience in October 2010. In July 2011, Rosie joined Time Inc. UK as a fashion intern for LOOK Magazine. She worked there for a month and moved on to work on TwoFour Group, News UK, Brodies LLP, Lux Events Ltd, Deadline News, Deadline News, L.K.Bennett, STV Group plc, Reworld Media. She worked on all the aforementioned institutions for a brief period of time.

In September 2016, Rosie joined New Life Stories as a Digital Communications Specialist. She worked there until April 2018.

From 2018 to 2020, Rosie worked at Accela as Junior Account Executive and Marketing and Community Manager. Since May 2021, Rosie has been working at Next Gen Foods as a freelance copywriter. Furthermore, she is also an Editorial Intern at HELLO! Magazine.

Rosie Smith did her high schooling at The High School of Dundee. For further education, she joined Edinburgh Napier University. She graduated with a 2:1 from there in 2016 with a bachelor’s degree in Journalism.

While we know that Rosie stars in Channel 4‘s reality TV show Celebrity Gogglebox with her mom Lorraine Kelly, it is not the first time she has collaborated with her mom professionally.

Together with her mom, Rosie produces a podcast series called What If. What If explores the ‘what ifs’ of life. Every week, they talk with celebrity guests and discuss what success and satisfaction mean to them.

Rosie Smith’s dating life was a secret matter for a long time. It was only in May 2021, people got to know about her boyfriend James Bannister.

Apparently, James works as a freelance automotive writer and consultant. He works on commercial and editorial projects with different individuals, publications, and companies. In the past, James was in a senior position at UK’s popular automotive PR firm. Furthermore, he had worked at Classic Driver as a staff writer.

As of June 2021, we had no idea about when did Rosie and James begin dating. However, one thing that we can all agree to based on their Instagram pictures is that they have a good rapport between them. 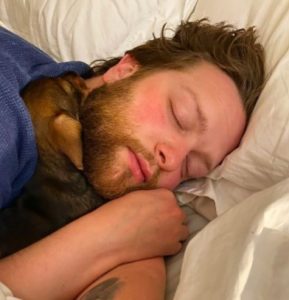 Rosie introduces the world to her boyfriend.

The first time Rosie introduced the whole world to her boyfriend was on May 19, 2021. She posted a picture of James sleeping and captioned it: ‘🐻 and 🌭 Officially been replaced by @rubyisasausage.’ In case you did not know, Ruby is a mini wire-haired Dachshund whom she loves with all her heart.

A couple of days before, James had also introduced Rosie to his Instagram followers by posting a picture of her.

As of June 2021, Rosie shared no recent plans of making James her husband.