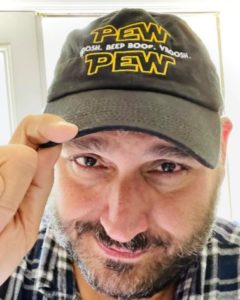 Atlantis, a fictional island as of today, was first mentioned by the Greek philosopher Plato in his works Timaeus and Critias. In his works, the story of Atlantis concludes by submerging into the modern-day Atlantic ocean.

While we will be talking about the new show,  this Stel Pavlou wiki will be focused on Stel Pavlou for the most part. Get to know about Stel’s age, net worth, family, and wife info by reading the article to the very end.

Stel Pavlou was born in Gillingham, United Kingdom. However, he grew up in many places including Borstel, Rochester, and Chatham, England.

The British screenwriter was born to working-class parents. His dad, Paul Pavlou, was a taxi driver and his mom Maureen worked as a home-help.

Stel is a Greek from his dad’s side. His dad Paul was a native Greek Cypriot from the island of Cyprus. That may be the reason why Stel dedicated the book Gene to his dad post-humously. From his mother’s side, Stel is English. Stel’s mom Maureen is a Rochester native.

Stel Pavlou stands tall at a height of 6 feet 4 inches and weighs no more than 90 kilograms.

By June 2021, Stel Pavlou’s net worth was reported to be around $1 million.

As an author, Stel published his first novel, Decipher, in 2001. Decipher was set in Atlantis and it explored the implications of nanotechnology. In 2005, Stel wrote the historical thriller, Gene. His most recent novel, Daniel Coldstar: The Relic war, a middle-grade sci-fi series was published in 2017. The book received a Junior Library Guild Selection for Fall 2017. As a sequel to his 2017 book, Stel wrote Daniel Coldstar: The Betrayer in 2019.

Stel has also written three short stories for Doctor Who. As a screenwriter, Stel wrote the screenplay for the popular movie, The 51st State. For Morgan Freeman and David Fincher, Stel wrote a draft adaptation of Arthur C. Clarke’s Rendezvous with Rama.

Furthermore, Stel is the author of a new groundbreaking theory on the date of Atlantis’ destruction circa the fifth millennium BCE. His research paper titled “Dating Atlantis: How Manetho Helps Address the Critias 108e Problem” will be published in 2021.

In the new show Hunting Atlantis, armed with new evidence the hosts Stel and Jess travel around the world, unearthing sunken cities and ancient artifacts, in hopes to find any leads on the mystery surrounding the lost city of Atlantis.

As planned, the show Hunting Atlantis premiered on June 2, 2021, on Discovery Channel. To the joy of every person involved in the making of Hunting Atlantis, the viewers loved the show, especially the chemistry between the hosts, Stel and Jess Phoenix.

But, you will be surprised to know that they are not personally linked. And if you thought Stel and Jess were married, you are certainly wrong. In fact, Jess has been together with her husband Carlos for the last 12 years. Stel, too, has been married to his wife Michelle for a long time.

Coming to Stel Pavlou’s romantic life, the British novelist is married to his wife, Michelle Pavlou. Reportedly, the adorable duo married in a close wedding ceremony held in the year 2007.

On September 7, 2020, Stel and Michelle celebrated their 13th wedding anniversary. Stel took to Instagram to thank the love of his life for bearing 13 years with him.

Stel’s wife, Michelle is a writer by profession. On June 5, 2020, Michelle shared her first article on Medium. The article, which was titled If The Flag Had a Soul, spoke to the heart of the Americans and asked what the flag would want to hear if she could hear all her citizens. 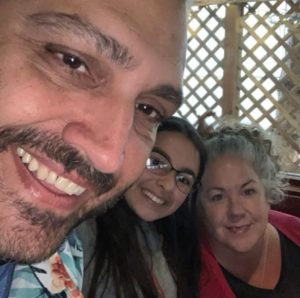 Stel, his wife Michelle, and their daughter Lorelei in one frame.

Together, Stel and Michelle share a beautiful daughter, Lorelei Pavlou. Stel frequently posts about his daughter. On March 26, 2017, Stel posted a picture of his daughter holding the sci-fi book Daniel Coldstar: The Relic War in her hand.

A glance through Stel and Pavlou’s Instagram also reveals that Lorelei loves to act. She even won her first award for her performance of the Wicked Witch on March 18, 2018.

Until August 2020, Stel lived with his wife and daughter in his home near Castle Rock, Colorado. After which, he probably left for the filming of Hunting Atlantis, the Discovery Channel show which premiered on June 2, 2021.

Stel had also made an Instagram post on August 25, 2020, telling that it was his last meal together with his family for a long time.