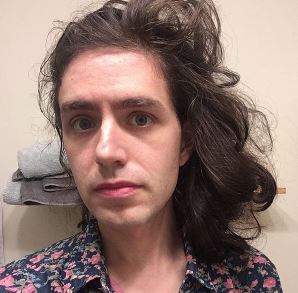 Singer-songwriter, Ezra Furman never confirmed her gender until April of 2021. She wrote a lengthy post where she addressed being a transgender woman and being a mother. So, it was obvious for her fans to enquire about her relationship and details about her wife.

We’ve dug a few details on Ezra and her partner/wife along with other details. So, scroll down to learn more about Ezra Furman.

On 30 November 2018, Ezra Furman tweeted as a transgender person she was trying to figure out why she didn’t care about gendered pronouns when others did. At the time, she was fine with he/she/them. She pointed a question at the end of the tweet—” Does anyone who cares about pronouns (particularly non-binary people) want to tell me why they do?”

While confirming her sexuality, Ezra shared, “I’ve come to terms with the fact that I am a woman, and yes for me it’s complex, but it’s complex to be any sort of woman. I am very proud to be a trans woman and to have come to know it and be able to say it. This has not been an easy journey.”

“… I am a mom and I have been for a while now (like 2+ years)…,” Ezra Furman posted a series of five photos where one of them had a baby lying down with her. She covered the identity of her child in the post.

In the middle of the post, Ezra also talked about being a parent. She accepted that parenthood was beautiful and holy. But out of the fear of being ridiculed, she never publicly shared about being a mom.

Ezra addressed the problem of being a trans was they don’t have a vision of having an adult life. She used the term ‘our’ when addressing her baby. This hinted about Ezra having a partner in her life. Even though she had a partner, she never revealed details.

So, there existed very little possibility Ezra was married to her partner. And even if she did it one needs to go a great length to recover to keep it away from the media’s nose. 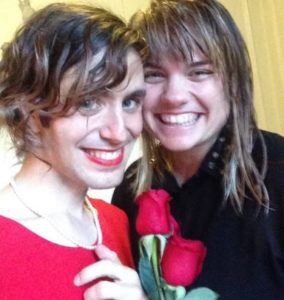 However, Ezra had little information on her Facebook. On 19 July 2017, she posted a picture of herself together with a mystery woman, possibly her wife. There on the post, she wrote, “A month ago I asked Rosemarie to marry me. She accepted. It’s been a month of a whole new kind of happiness I haven’t ever known before. We’re really doing this thing. Just a little life update. What a feeling.”

When Ezra’s grandfather Oliver Patrell, CEO of Empire and Colonial Penn Insurance, passed away on 10 June 2019, an obituary in his memory was published. In the obituary, she had her name mentioned with her partner Rosie Wagner. If they haven’t separated or divorced, Ezra Furman might still be engaged to her partner and most probably married to wife Rosie Wagner.

Ezra Furman celebrated her birthday in September. Born in 1986, she turned 34 years old on 5 September 2020. This made her a Virgo by zodiac sign.

Talking to Chicago Tribune, Ezra opened up about her parents’ influence on her music career. She explained, “… I only liked a few songs, and I thought she was a showoff-y singer. Needless to say, I was an idiot. My mom brought that one into my life. I think I was just raiding my parents’ record collection at some point and searching for the key to becoming a great songwriter.”

Ezra Furman was born to her father Boris Furman and her mother Mel Patrell Furman in her hometown of Evanston, Illinois. Her parents are happily married as of April 2021.

Boris and Mel went on to have four kids; Noah Furmann, Emma Furman, Jonah Furman, and of course Ezra. Mel’s Twitter account suggested that she was a professional communicator and a poet. She was a technical writer. Whereas, Boris worked as a stockbroker.

Ezra Furman Height: How Tall Is She?

Going by her appearance, Ezra Furman stands tall at a height a little above 5 feet 10 inches (1.77 meters). Her lean body weighed about 64 kilograms (141 lbs).

As a singer-songwriter, Ezra always wanted to be remembered. She won the hearts of many and is not stopping anytime soon. Her followers and admirers followers her on social media. As of April 2021, her Instagram account earned her 36.9k followers with a verified account.

Ezra Furman, Evanston Township High School, and Tuft University alumni sat on a total net worth of $600 thousand. But, her rise as a musician is a story worth sharing.

On Ezra Furman’s bar mitzvah, she got her parents convinced to get her first guitar on the condition that she had to learn to play Bob Dylan songs. Back then she was into Green Day than a folk artist. Nevertheless, she couldn’t shake off the fact that Dylan’s lyrics inspired her to be a songwriter.

From 1999 to 2004, she wrote about two hundred songs. She then became a member of a pop-rock band named Ezra Furman and the Harpoons, with her classmates Jahn Sood, Job Mukkada, and Adam Abrutyn. The band recorded their first song in dorm rooms and played their first concert in the Tufts campus center.

A year after that, the band signed the deal with an indie record label Minty Fresh. Before breaking up, the band released their first studio album Banging Down the Doors, and toured across the US and UK. The band also released Inside the Human Body and Mysterious Power.

Ezra released five solo albums, The Year of No Returning, Day of the Dog, Perpetual Motion People, Transangelic Exodus, and Twelve Nudes. Over 375k people visited her Spotify profile and listened to her music.

The Chicago-native also created a YouTube channel where she promoted her music. The platform garnered 22.4k subscribers in total.

Beyond her talent in music, she also dipped her toe in filmography. She landed a minor role as a band singer in Netflix’s TV show Sex Education. She also wrote and performed soundtracks for a few episodes of the same series.

It was made possible all because of her mutual friend who was one of the producers of the show.