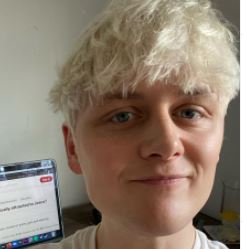 MTV’s Catfish UK premiered on April 21, 2021, and the show introduced the world to its new host, Oobah Butler. It seemed that the show’s previous host, Nev Schulman stepped down from his spot, thus, giving the local lad a shot at the spotlight.

So, who is he? What was his sexual preference? Is he gay or does he have a girlfriend/wife? Stay till the end to get answers to all these questions.

Oobah Butler might sound like a made-up name to many. But yes! That’s his real name. According to him, “Oobah” was originally his elder sister Becky’s nickname.

If you don’t know, Oobah is the youngest of 6 siblings — including his sister Rebecca (Becky), and brother James Butler.

Trivia: James is a kind-hearted man. In 2021, his best friend died at the age of 36, and he was trying to raise £5,000 to cover costs and repatriation of his ashes to Hungary. Oobah chipped in and promoted the campaign over his Twitter as well.

Other members of Oobah’s family include — Gill, Ethan Butler, and his mother Vicky Butler. Talking a little about Vicky, Oobah shared that she was once a chain smoker who gave up smoking in April 2019.

Oobah Butler is 5 feet and 9 inches (175 cm) in height. Over the picture he posted alongside Jeremy Corby on IG, Oobah seemed almost as tall as him.

The London-raised writer, director, and journalist, Oobah Butler was valued above $500 thousand net worth in 2021.

Growing up in Feckenham (near Redditch, in Worcestershire), Oobah learned how to fake his way into being the number 1. He was popular for creating a fictional restaurant, The Shed at Dulwich, which went on to become a top-rated venue in London on TripAdvisor 2017, despite never having served a dish.

Also, he came to the limelight for faking his way to the top of Paris Fashion Week in June 2018

Furthermore, he has sent fake versions of himself around the world, also sent an attractive lookalike to his high school reunion party in Nov 2020.

Summarizing his journey he even published a book called “How to Bullsh*t Your Way To Number 1” in April 2019. For which, he awards in 2018 — the British Society of Magazine Editors for Best Content Idea 2018, Video Project of the Year from the British Media Awards, and the DRUM Agency for Content Creator of the Year 2018.

Also, he was hailed as a “genre of one – a true artist” by The Guardian’s Marina Hyde for his works.

Confessedly, Oobah mentioned that he “always got up to high jinks for his own entertainment.” Just at the age of 14, he pretended to be his own band’s manager, later paid to write fake TripAdvisor reviews for restaurants, and the deceptions continued.

Fuerhtmore, he shared that his family wasn’t surprised by how he was making a living then. “I’ve always been like this”, he said.

But before all it started, Oobah wanted to be a musician; which he failed “miserably” at.

Oobah Butler was surmised to be gay by a few of his fans. One even took it to his Twitter to write, “Mate you look like a gay Eminem.”

But, Oobah had yet to clarify his sexual preference as of 2021. Considering his ambiguous posts like “Here’s a short I wrote about 24hrs in Mexico; my accidental gay date, hospital trip, when I thought I was gonna die” (dated March 25, 2016, via Twitter), it’s hard to say what is going on in his mind.

Oobah Butler first had a girlfriend when he was in high school. Over one of his stories, he mentioned he used to pass off the lyrics to Incubus’ “Mexico” as a poem he had written for his then-girlfriend.

Looking at his social media timeline, Oobah seemed to be in a relationship in 2015, and fast forward to 2020, he still was mingled then. However, it was unclear if his girlfriend was the same one. But he often tweeted about her — about how she threatened to destroy him if his phone rang one more time, or how he irritated her saying “Omelette du Fromage” for the entire day.