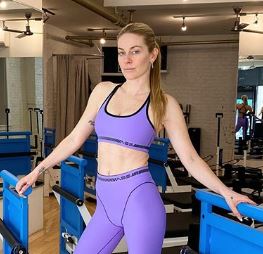 Leah McSweeney is more than a fashion designer. She rose to the spotlight starring in the reality TV show “Love and Hip Hop: New York.” Her introduction to “The Real Housewives of New York City” was one of the talked about topics in early-April 2020.

Read about Leah’s dating status and relationship with former husband prospect & daughter in the article below. Additionally, find out her boyfriend, net worth, and family background!

On 27th August 2020, Leah McSweeney became 38 years of age. She is a Virgo. Moreover, the famed fashion designer gets showered with birthday messages on the same day as actor Aaron Paul.

Coming to her educational credentials, Leah attended the Convent of the Sacred Heart on NYC’s Upper West Side. After getting expelled from there, she and her family moved to Newtown, Connecticut. For college, she returned to New York and completed her studies at the Fashion Institute of Technology.

Reportedly, Leah is siblings with Sarah and Daniel McSweeney. Meanwhile, online sources cited Bunny and Bryan McSweeney as her parents.

Growing up, Leah shared a complicated relationship with her mom and dad. It all began when she got expelled from her school and her parents refused to take her back. Over the years, they made amends.

20-year-old Leah McSweeney got into an altercation with NYPD around 2002. After sustaining injuries from the incident, she sued NYPD and won a settlement of $75 thousand.

With the settlement money, Leah launched the clothing line “Married to the Mob.” By 2020, the streetwear brand had around 100 retailers and collaborated Nike and Reebok. Elle, Essence, Inked, Nylon, Complex, Paper, and Vogue also featured the said clothing line.

Per several sources online, Leah McSweeney owned a net worth of over $2.5 million.

As a reality star, Leah McSweeney garnered credits on “The Millionaire Matchmaker” and “Love and Hip-Hop: New York.” Initially, news broke that she was replacing Tinsley Mortimor on “The Real Housewives of New York City.” Tinsley herself later rebuked the rumors.

“She’s a great addition to the cast. It’s not easy shoes to step into. And I feel like she walked in and kind of fit right in. So excited about that because I really like her. She’s a mother and a business owner and, at the same time, has a vulnerability to her that I think fans will really relate to her.”

“You know, we give every new girl a hard time. It’s a hazing experience. With her I just took on the role as her surrogate mother and you’ll see during this season… You’ll see when you watch how I was her surrogate mother and because of that, I held [her] to a different standard and a higher level, which sometimes we butt heads about in a big way.”

Meanwhile, Leah seemed equally optimistic about her inclusion in the show. Admittedly, she wasn’t going to let anyone step all over her because of the newcomer status.

For her age, Leah McSweeney seemed a lot younger with 35-28-36 inches body measurements. Talking height and weight, she boasted five feet & seven inches and 59kg respectively. Moreover, the beloved reality star had tattoos on her all five fingers (right hand).

According to her bio, Leah advocates for mental health. Open about her Bipolar II Disorder diagnosis, she doesn’t shy away from speaking about her journey.

Of all the social media, Leah McSweeney appeared most active on her Instagram. By August 2020, her profile had amassed 373k followers. Meanwhile, she didn’t use Twitter.

As of 2020, Leah McSweeney wasn’t married. Nor was she dating anyone specifically. The fashion designer, however, was a mother to a daughter named Kier Marie that she shared with Rob Cristofaro — her former boyfriend/husband prospect.

To those in the dark, Rob is the founder of the streetwear brand “Alfie.” A native of New York City, he also identified as a graffiti artist. Together, Rob and Leah purchased a property in the Catskill Mountains in 2008. Around the same time, they welcomed their daughter Kier.

Leah and now-former boyfriend Rob separated many years — without bestowing each other the title of husband and wife. Despite the spit, the duo worked closely to co-parent their pride and joy.

In August 2020, Leah shared a photo of herself with William Hartigan and captioned it: “Get yourself a cute financial advisor”. Immediately after, media outlets labeled William the reality star’s boyfriend.

Days after, Leah “untagged” William from the post. She would also delete the photo.

For his part, talking to Heavy.com, William insisted he and Leah weren’t dating. Furthermore, he insisted they enjoyed a decade-long relationship.

Reading into her interviews and articles, one could easily make a case for Leah McSweeney being a republican. In a sitdown with Snobette in 2016, she stated Donald Trump wasn’t a racist. Additionally, she labeled the POTUS “smart.”

Via her clothing line “Married To Mob,” Leah intended to promote feminism. However, the fans were quick to point out her Penthouse op-ed where she criticized Rose McGowan and Asia Argento using the #MeToo movement for personal gain.

On 25th August 2020, Page Six reported RHONY had fired Dorinda Medley for being a “mean drunk”....