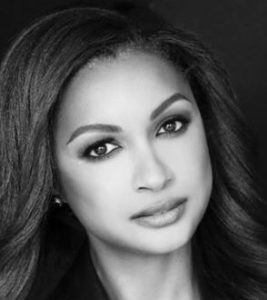 Eboni K. Williams is an attorney, a journalist, a radio host, and now a reality star. On 08 October 2020, People magazine announced that Eboni was set to join the cast of Bravo TV‘s popular series The Real Housewives of New York City.

Read the article below to know everything there is to know about Eboni K. Williams and her recent foray into reality television.

Eboni was born on 9 September 1983 in North Carolina. Having her birthday on September 9, her zodiac sign was Virgo.

Eboni K. Williams was raised by a single mother in government-subsidized housing. Her mother was self-employed and they are quite poor growing up. At an early age, Eboni won the Miss NC Cinderella Girl Pagent. According to Eboni, her mother initially thought that pageants were rich girl sports. Eventually, however, she supported young Eboni’s participation.

Eboni grew up not having her father around in the family. There was no further information about what happened to her mom and dad. It was not known whether her parents were separated or something happened to her father.

Eboni K. Williams belongs to the African-American ethnicity. Meanwhile, she doesn’t seem to have any siblings.

Eboni K. Williams has a height of 5 feet 1 inch and weighed under 53 kgs. She had an amazing figure, with measurements like 35-24-35 inches.

Eboni had a huge following on social media. On Instagram, she had 206 posts that range from her own pictures to clips of her show. She a massive following of 120k on Instagram. On Twitter, she had 78.1k followers. Her Twitter’s numbers were less than her Instagram’s, however, it was still a huge number on Twitter’s standards.

She also had a Facebook fan page, which had 8k likes and a little over 8.5k followers.

Before talking about Eboni’s career, let’s talk about her education. For her college education, Eboni went to the University of North Carolina at Chapel Hill, where she studied Communications and African Studies.

Later, after getting her undergraduate degree, she went on to study law at Loyola University New Orleans College of Law.

After graduating with law degrees, Eboni practiced as an attorney at Mecklenburg County Public Defender Office. During her as a career as a lawyer that lasted only a little over a year, she represented indigent people in District Court. She also worked for Louisiana’s Secretary of State and Louisiana’s Attorney General.

After that, she ventured into journalism. Eboni worked as a correspondent for CBS News for about a year between 2014 and 2015. After leaving CBS, she immediately joined Fox News as a host and correspondent.

After TV, Eboni turned her sights into radio. For a few months in 2017, she joined WABC for a show with Curtis Silwa. Currently, i.e. October 2020, she was hosting the State of Culture, a rap-culture show, alongside Remy Ma and Joe Budden on REVOLT TV. She was also the executive producer of the show.

Furthermore, Eboni was also an author who had written a book called Pretty Powerful: Appearance, Substance, and Success. Eboni’s book was published in 2017. It contained the life lessons on how to balance being beautiful and being successful.

When the news broke out that Eboni K. Williams was going to be a part of Bravo’s Real Housewives of New York City, media and fans were eager to know about her husband. She had always been silent about her boyfriend(s). However, her participation in Real Housewives of New York City did hint that she was close to getting married and having a husband.

On the other hand, there was no information whatsoever about Eboni’s potential future husband/fiance. There was once a rumor that her childhood friend, Gary Sandy, was her boyfriend. However, the rumor was never confirmed.

It looked as if only the Real Housewives of New York City would be able to reveal the who was Eboni’s husband.

Speaking before her RHONY debut, Eboni K. Willaims hinted she was planning to start a family. Again, she refused to delve further.

On 25th August 2020, Page Six reported RHONY had fired Dorinda Medley for being a “mean drunk”....

Adam Kenworthy was known to the audience of reality TV shows, initially for his appearances as one of The...